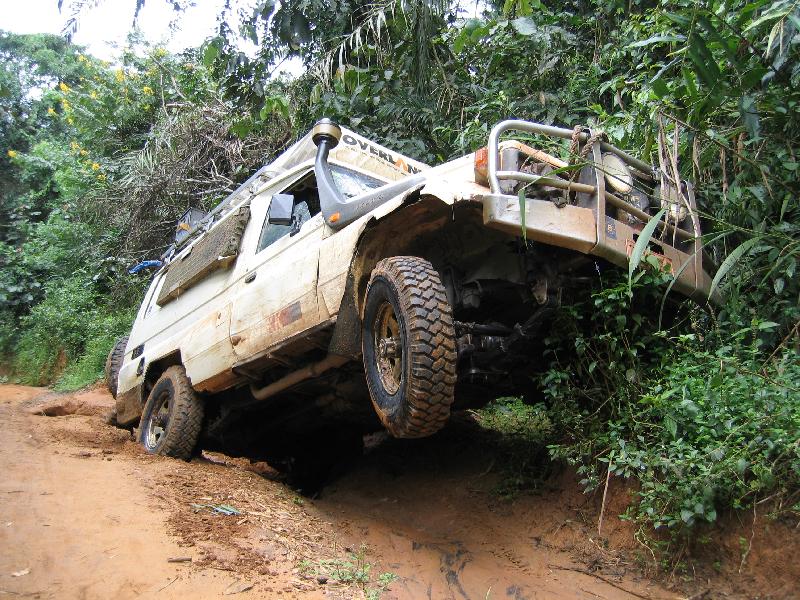 A couple set out to pass through second poorest nation in the world in their Toyota BJ70 LC, is a feat in its self to see how they did not give in to corruption despite being white foreigners in such a hostile country. Here in Pakistan, a thought just occurred to me that even though we can fight (waste) several minutes or incases hours to run free without giving in to corruption but we rather chose the easy way.

Belgians and Congolese do not have a good history either, the Congolese blame them for several wars but they went through it. Cannibalism seem to be an ancient issue to us as well but the last incident of cannibalism occurred in Congo in 2006, I’ve read through all the 60 pages of their report in couple of hours. I just couldn’t let go of it before the end and I am glad that they finished the report before I found out as I just couldn’t have had the heart to wait for Frederik’s next installment neither do I have the heart to go in such a hostile country where I know nobody.

I recommend everyone to go through their story and trust me, you won’t regret it but if you don’t then you would.

Map of Congo. Lubumbashi in the bottom right corner. Kinshasa on the left.

Excerpt from the story:

Fully loaded we left Lusaka. We always had a strange anxious/nervous feeling when entering a new country. But this time the feeling was much stronger. Was this the first time we were actualy nervous for entering a country? The border at Kasumbalesa was the usual chaotic affair. Especially the Zambian side proved to be an annoying experience. Many pushy touts and very crowded. The Congolese side on the other hand had very little touts. It was chaotic too, but much smoother then their neighbours.

We were warned about the “5$ dollar first entry” bribe at the Congolese side.

This conversation was in French ofcourse:

Customs Officer: “Hi, that’ll be 5$US”
– Me: “Ofcourse,but what is it for exactly?”
CO: “Tourist tax”
– Me: “Oh, I was not aware of the existance of a tourist tax?”
CO: “Yes, but only on the first entry”
– Me: “Aaaah, ofcourse how could I forget. I already paid this when I entered at by boat in Kinshasa a few months ago” <– I lied, there is no such tax and I never paid such tax. But I did have the proof of my previous entry in Congo in my passport
Co: *long silence*
Co: *hesitating* “You still have to pay…”

He lost, I won. He knew it but he would not give in ofcourse. I sat there for another 10 minutes before I was let go without any further words. This went smoothyl… very smoothly! I was starting to think that all these corruption stories about Congo were overrated. Little did I know at that time…

We actually bougt insurance at the border. Not that we believe that it would be of any use in case of an accident. But just to avoid the bribes associated with not having any insurance.

Next obstacle was the road tax for the short distance between the border and Lubumbashi. 50US$ for foreigners! I waited until a lorry was waiting at the barrier and then just drove past it and floored it. 50$ in the pocket 🙂

We are normally very principle about official (!!!) taxes, we just pay them as they usually benefit the roads, etc.. . In this case it is known that all of the money for this road toll goes directly to Kinsahsa. Nothing ever returns to the maintenance of these roads, or anything remotely related to the province it is in. It shows:

Go here to read the rest of the story: Democratic Republic of Congo: Lubumbashi to Kinshasa

And Fog Lights Are…