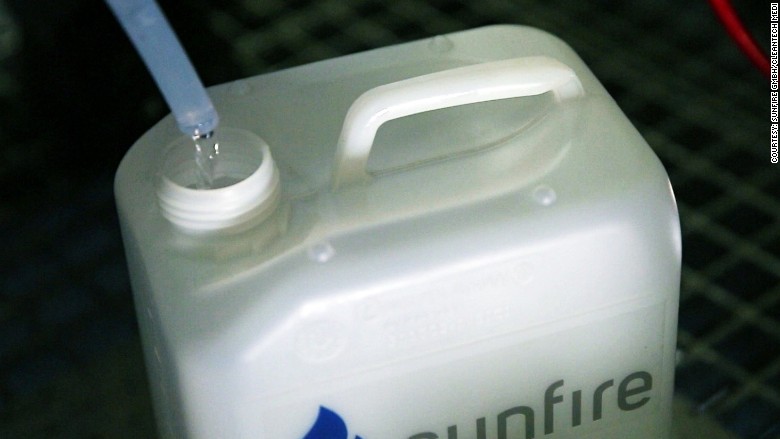 It is a fact that the fossil fuel is gonna run dry sooner or later. We are consuming it with speeds at which we never did before. But at the same time, many are aware of this and are actively trying to find substitutes to our energy need. Some are focusing on solar power, some on wind and some are wrangling with hydro power. But the goal is one; to find a sustainable energy source.

Audi has jumped in the boat of alternative fuels as well. They are experimenting with the idea of making diesel with water and air. You read it right; water and air. This fuel is produced though a ‘power to liquid’ process and they are calling it ‘e-diesel’.

Audi has combined forces with a clean tech company Sunfire to work on this project. And they have announced that they have already made their first batch of this clear fuel at their research lab in Dresden.

The idea is to use carbon dioxide gas, which already is present in abundance in our atmosphere and is the most common greenhouse gas. Sunfire claim they can recycle the gas to make a more efficient, carbon-neutral fuel. Good thing about ‘e-diesel’ is that it doesn’t contain contaminants like sulfur etc. Plus point to that is that engine would run cleaner and quieter.

To make this magic potion, scientists first get the hydrogen and oxygen by heating steam at extremely high temperatures (over 800 Celsius). But instead of conventional ways of heating, they are using green energy like wind and solar power. Using fossil fuel in the process of making a clean fuel defeats the purpose, to be honest.

In second phase, hydrogen is mixed with carbon dioxide under pressure and heat to create what they are calling ‘blue crude’. The crude is then refined in a similar way fossil fuel is refined to extract various sub fuels from it.

Good thing is, you can not only use this fuel on its own, but also mix it with fossil diesel as well.

It is obvious that neither the production will be enough to fulfill the fuel demands of modern day, nor the production cost will be affordable yet. But one must appreciate the effort put into this. Germany has planned to close down its nuclear power plants by 2022. They are moving towards cleaner energy sources. Considering their focus towards clean fuel, one can expect them to invest heavily in this project as well.

Ferrari LaFerrari Worth $3.7 Million Crashes In China By A Guy Wearing His Sister’s Shoes