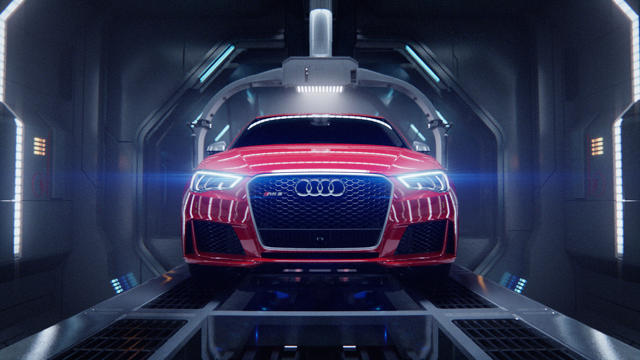 We’ve often discussed the notion of one car giving birth to another car while  chitchatting at car meets, however, it is very rare to see that actually happening. But in this age of technology nothing is impossible. We are from the lucky generation who can safely say, after watching the following video, we have seen every thing.

Audi is known for creative and out-of-the-box videos, such as the ad which portrays street mechanics as zombies, however, this time around, Audi went all-in on the creative and produced something very innovative and graphic.

To demonstrate Audi RS3 has so much in common with the Audi R8, the German automaker has released a video that shows an RS3 coming out from the back of an R8, symbolizing the birth of a child. If this wasn’t enough, you can see the RS3 covered in placenta and oozes liquid which are later cleaned up by some robots, who then welcome the Audi RS3 into this world. You can even see the umbilical cords of the auto world disconnecting from the RS3.

Many people may feel disgusted after watching this video, but we feel that birth is a natural thing and Audi has given visuals to our imaginations of one car giving a birth to another car. Although, there is no word on who the father of RS3 is, but our bets are on the Audi RS6.

At the end of the video you can also see the birth date, weight, etc. of the RS3.

Watch the video below and let us know what you think of it: