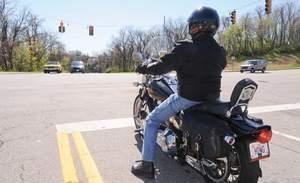 General observation rules that bikers in our part of the world are found to be the most impatient lot when it comes to waiting for the green light yet they are also the most vulnerable to fatalities in case of an accident.

People usually floor the car to catch the green light and just squeeze themselves through the tight intersection where slight turn of the steering can throw many motorcyclists a mile in the air quite easily moreover, they remain unfrightened or ignorant of the fact that their life is more precious than the impatience they display on the signal.

However, one of the states in the United States of America has bill sitting on the governor’s desk for his signature has caused quite a stir on the internetz and other media outlets. Its about letting bikers go through red lights because motorcyclists have complained that they’re bikes are not detected by the loop detector which flips the green light in favor of others on an intersection.

Bill HB-2860 lets motorcyclists go through a red light if it doesn’t change to green in a “reasonable amount of time.” It’s currently sitting on Governor Pat Quinn’s desk waiting for a signature, having made its way through the Illinois House and Senate. The Senate added an amendment limiting its scope to cities with fewer than two million people.

According to the Daily Herald, Geneva, Ill police commander Julie Nash said she would be “stunned” if the bill were signed into law.

Loop detector is a device installed on signals which measures weight on one light of the intersection and based on the load, it calculate the traffic rush and than toggle between the lights to make sure that one signal doesn’t get all rushed up but given the weight of motorcycles – it isn’t able to detect or calculate enough rush in order to let this signal go green therefore stranding motorcyclists for too long.