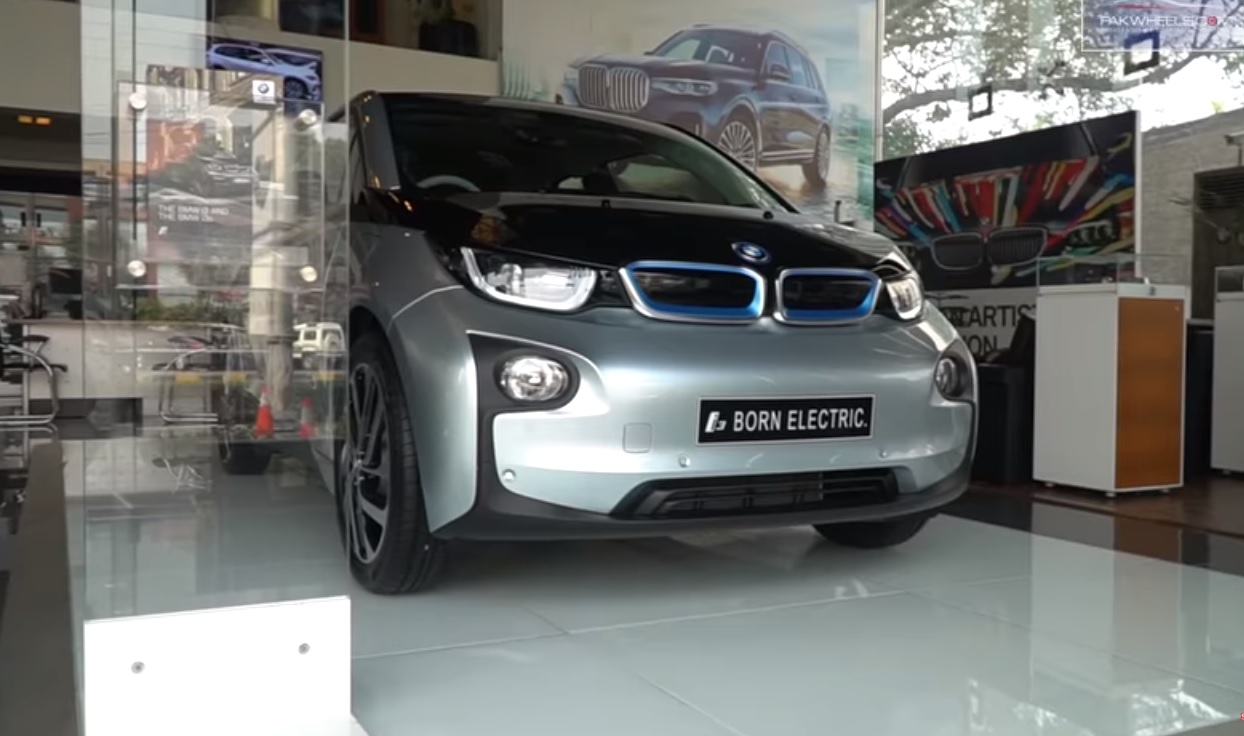 Keeping up the tradition of bringing new and exclusive content for our readers, PakWheels.com has brought yet another car review for its viewers, take a look.

The car under review is the BMW i3, which is the first-ever BMW electric vehicle. Electric means that there is no engine in the car. There are two versions of i3: simple i3 and i3s. The BMW i3s is the sporty version of the regular i3. It has sports steering and sports suspension. Moreover, it has a sporty appeal in the looks. The car being reviewed is the basic i3. Under the regular BMW i3, you can also opt for an i3 REx. REx means that the car comes with a range extender. The BMW i3 REx is the more popular model of the i3 across the globe.

There are three kinds of BMW vehicles: BMW regular, BMW M and BMW i. The concept of BMW i is derived from pure electric or “born electric” as BMW itself puts it. Whenever you see a BMW with an “i” insignia, it is either an electric hybrid or a plug-in electric hybrid. The BMW i3 is a rear-wheel-drive car, just like any other BMW in the world. A wall-mounted charger is included with every BMW i3 model.

The car comes with 19-inch alloy rims that can be upgraded to 20-inch rims. The exterior ergonomics and design of the car give it a very compact look. However, actually, this car is big given the size of the wheelbase. The body of this car is made out of carbon fiber. The doors given in this car are suicide doors, just like those that come with Rolls Royce Phantom. The car is made out of recycled materials that make it really light.

This car is made on a 50/50 weight distribution. This improves the driving pleasure even though it is very light. The rear of the car has L-shaped LED taillights. Similar lights can also be seen on the BMW i8. There are a BMW emblem and a rear-view camera in the center. The rear bumper has four parking sensors hidden in the piano black trim.

The interior of the BMW i3 is also made up of recycled and environment-friendly materials. Due to a sizeable wheelbase, the legroom of the car is substantial, considering its size. The headroom in the rear is also sufficient for an average-sized adult to travel comfortably. The rear seats have ISOFIX mountings for child seats and adjustable headrests. This car also has an optional Harman Kardon sound system with speakers in all four doors of the car. The boot of this car is sizeable to hold your luggage as a second car of the family. A big full-size suitcase can be put in the boot of this car.

You can also remove the shelf cover over the trunk to give you more room in the trunk. There is also a small light to illuminate the trunk. There is an armrest at the front for both the driver and the front passenger. The car also comes with a glass roof. There is a cupholder inside the center console under the armrest. The seats are manually controlled and have a height adjustment feature. Storage spaces are also optimal in the center console, door pockets, and a huge compartment in the dashboard.

The interior ergonomics of the BMW i3 gives it a roomy and comfy feeling. There are wood accents inside the car that gives it a premium look. The light toggle switch is given at the bottom right of the dashboard on the driver side under the climate control vent. On the driver’s side door, there are buttons to lock and unlock the doors and window controls for both front windows. Windows can be only lowered at the front only.

All of the batteries are present in the boot of the car. These batteries are lithium-ion batteries. Despite lithium-ion batteries, there is a small 660cc 2-cylinder generator engine present in the bonnet of the REx BMW i3 only. This generator engine is supposed to charge up the batteries in the car. The range of this car is 185km on a pure electric charge. There is no speed limit in this car, and you can speed this car up to your desired limit.

However, the ideal limit is 90 km/h. When the charging in the batteries is dropped to as low as 6%, the power from batteries gets cut off. Now, the generator engine starts to act and charges up the batteries. There is a small fuel lid at the front for the generator engine. The fuel tank capacity is only 9 liters. There is no physical appearance of an engine in the hood of the car. Instead, there is small storage space.  The 0 to 100km/h time for this car is 7.2 seconds. The lithium-ion batteries can produce up to 170bhp and 250Nm of torque.

There is only one gear in the car, and the gear lever is mounted on the right side of the steering. This is also called the one-speed electric gear. There is a portable charger in the car which can be plugged into an electric power outlet to charge the car. There are three driver-experience controls: Comfort, Eco Pro, and Eco Pro+. For urban driving, Eco Pro+ locks you to a speed limit of 90km/h and gives you an optimum economy. This car also comes with regenerative braking, where the braking system also charges up the batteries.

See the video review of the car below:

Charging stations are present in many areas for BMW i3 and other BMW electric vehicles. For example, one charging station is present in Packages Mall, Lahore. All you need to do is to take your car and plug in the charging cord. The car gets fully charged in 3 to 4 hours.

This car is comfortable and viable to drive in the city and gives optimal performance. The seats of this car are made of fabric, which is good for the sheer amount of heat that we endure in Pakistan. They remain cool and comfy to sit on it summers. The seat cushion is also deep so that you are not tired while driving it for longer journies.

The car does not make any noise, unlike internal combustion engine cars. This gives a quiet and soothing ride for the passengers. Moreover, sound insulation is also good, so that outside noise does not penetrate the car.

As standard, BMW i3 comes with 8 airbags. The BMW i3 gets locked automatically when you move away from it. The car also includes Park Assitance Package so that you can park your car without damaging any exterior item. Another feature that enhances the safety of the vehicle is the Park Distance Control (PDC). There are rain sensors that wipe the front windscreen instantly as it gets wet in the rain to improve visibility. This also enhances the safety of the car as you drive it in the rain. There is also a tire repair kit with this car so that you are not left stranded in case there is a flat tire.

The maintenance of an electric car like BMW i3 is very easy and economical. This is because there is no engine, and you do not have to replace fluids and keep a check on them. The BMW i3 is also very economical to drive and can be conveniently charged.

Moreover, there are no emissions coming out from this car as there is not an internal combustion engine present in it. Only the REx model has a small generator engine that gets activated very frequently.  There is also a six-years battery warranty certificate that you get with the BMW i3. There is a carrier service from BMW Dewan that will come to your aid if your BMW i3 breaks down. The carrier will locate your car based on its location anywhere in the country. This is a massive advantage to owning this vehicle in Pakistan.

The target audience of this car is one that goes for a daily commute. After the Electric Vehicle policy gets approved, the price of this car will be in the ballpark of PKR 10 million. Lastly, the electric power has been adopted very fast across the globe and will get penetrated soon in Pakistan as well.

Pak Suzuki increases the prices of its cars by up to PKR 90,000

How To Drive a New Car in Run-in Period?