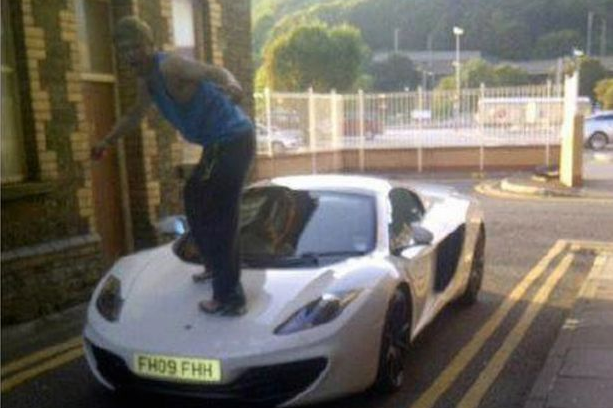 It was unbelievable for a businessman to see a teenager jumping up and down on the man’s brand new £245,000 sports car!

The owner of the car, who requested to stay anonymous, had just got his McLaren MP4-12C Spider back from repair work in Birmingham when he decided to go for dinner in Port Talbot, Wales. The owner, from Carmarthen, desperately chose a window seat in order to keep an eye on his car but he still failed to see a boy go up and down on his bonnet. The not-so-smart guy posted a picture of himself jumping on the car later on Facebook and the businessman received the picture via a friend.

“It was a little bit disappointing to say the least”, said the man. “I’ve only just had it back”, he added. The teen who posted the picture under the name Kane Reynolds, has since deleted his Facebook account. “I’m waiting to identify the bloke so I can send him a nasty solicitor’s letter”, said the businessman.

Fortunately there is no massive damage, but it is still going to cost a lot of money. Ouch!