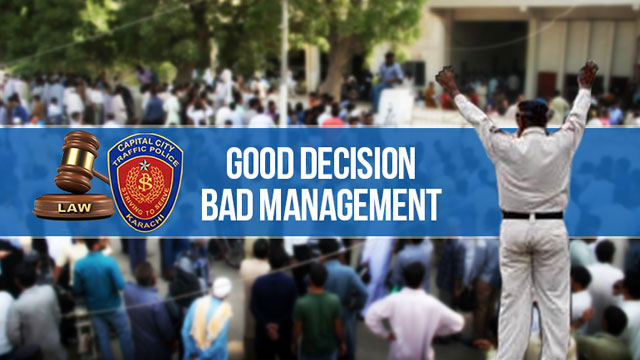 On 2nd November, Karachi City Traffic Police started a campaign against drivers who don’t hold a valid driving license. But it sadly failed on the very first day due to the incompetence and mismanagement of the department. It was no doubt a praiseworthy effort, but it would’ve been marvelous had the concerned department properly planned so that they could tackle any unforeseen issue effortlessly.

DIG Traffic Aamir Sheikh had announced that drivers without a valid driving license will not only be fined but will also might end up in jail. This caused concern among the residents of Karachi and they marched in thousands towards the traffic offices to acquire the driving license. But as expected, the department was not prepared for the influx of those wishing to get a license. The officials accepted only a few hundred applications at the traffic offices. After that, the doors were closed to the public and they simply refused to entertain the huge crowd. This caused panic and rage among the public.

People were already unhappy about this sudden intimation from the DIG, and when traffic officials refused to cooperate, people there started to riot which was very unfortunate. At some places, people jumped over the walls of the offices to enter the premises and broke the main entrance gate at the other. Police were called to control the crowd, and as usual people were sent home after getting beaten by the police. You can image how seriousness the whole debacle when Interior Minister Sindh had to step in to postpone the DIG’s initiative. It was postponed for 15 days at first, but things got so out of hands that the duration was extended to one month. 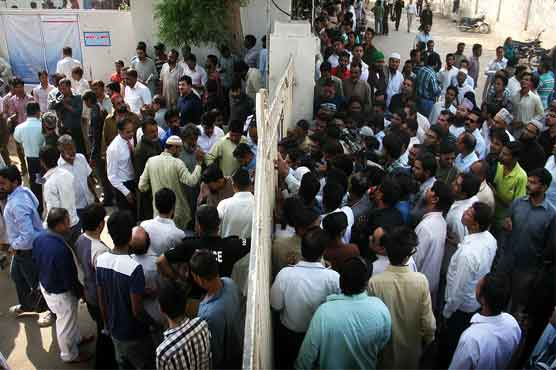 Whatever happened in Karachi has happened, and nothing can be done about it. But who is the culprit in the whole situation. People who never bothered to get their driving licenses on time and ran towards the traffic offices at once, or the traffic police department who threatened to jail anyone caught without a driving license but didn’t bother to prepare for the sudden influx of panicking the general public. If you look at it by being impartial, it looks like maybe Department of Traffic Police is slightly more to blame than the public.

Karachi is not only the area wise biggest city of Pakistan but also by population. The total population of Karachi has exceeded well above 20 million. But the government has failed to facilitate the ever increasing needs of the City of Karachi. And same is the case with traffic department. Currently, there are approximately 3.8 million cars registered in Karachi, and unfortunately only 10 to 12 percent people have valid driving license. It was necessary to start an activity to include rest of 90% of driving population in the circle, but traffic department should have been prepared to cater the public’s demands.

After the immediate orders from Interior Minister Sindh, the DIG also realized the seriousness of the situation and finally decided to improve the traffic office operations. The weekend holidays were canceled at offices to help deal with the ever-increasing number of applications. Also, DIG ordered to increase the number of personnel at the traffic offices combined with longer working hours. Better late than never. Although we should appreciate the steps taken by the DIG, but considering the amount of people who are marching towards traffic offices, even these steps seem insufficient.

The process of acquiring a license must be simplified. This will not only help the citizens but will also be beneficial for traffic police. For example, why not ask NADRA to help make a system through which people can deposit their applications. Also there should be more banks on the panel where fee for the application can be deposited. For medical of the applicant, use different government or private hospitals instead of just the traffic offices. This will help ease the trouble of the literally thousands of the people. Those four branches of will not get all the burden of the applications.

This scheme can also be made successful by dividing the traffic into different types of vehicles. For example, make it mandatory for commercial vehicle drivers to get their licenses first. After that, the police can target the private car owners and later motorbike riders. Although this would take longer, you can’t swoosh a magic wand, or, in this case, a police baton, to fix something that has been broken for decades.

Unfortunately, we have an abundance of folks who leave the tasks till the last minute habitually. And of course, traffic police cannot make them leave their homes. But indeed can improve their operations in a way to not let the situation get out of hands again.