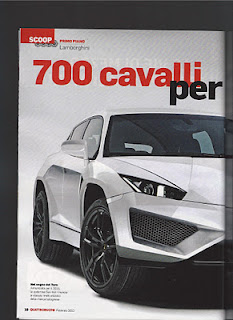 Can this be the Lamborghini’s SUV we’ve all been hearing about?

Lamborghini was created when a man’s ego was challenged, it was and to this day one of most mental cars the world have embraced. Though the original family now makes tractors but the legacy has been carried forward by capitalism, meaning that Audi which owns Lamborghini while it is owned by VW which is owned by Porsche.

Unlike Ferrari, Lamborghini has never replied in negative to rumors about it producing sedans or even an SUV and since Lamborghini did make an SUV for the Italian military called the LM001 – it is to date the most exotic SUV which looks and feel like rambo.

Rambo Lambo as it came to be later known around the world, however, there are new photos making their rounds around the internet about a possible modern interpretation of what you can expect to be the next Lamborghini’s SUV.

According to the Italian magazine, the definitive SUV should arrive in the year 2015 and although there was much talk of the Estoque, presented as a concept car at Paris Motor Show 2008, it will not be produced.

Although it has 4×4 configuration, this Lamborghini takes the stylistic features distinctive of her sisters: sharp lines, cutting elements, and very large help to give her a threatening look. The prototype of the SUV will be presented this year at St. Agatha Beijing Motor Show. Under the hood there should be the Gallardo V10 with an output of 575 horses but it is still early to give definitive information.

However, it is in no way should be called the successor to the great Rambo Lambo as this may look angry but as we all know, dogs which bark never bite.