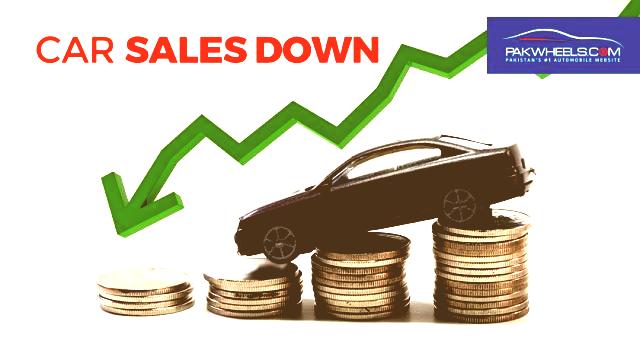 According to the latest stats published by Pakistan Automotive Manufacturers Association (PAMA), car sales have yet again witnessed a decrease of 39.40%, whereas motorbike sales have gone up by a slight margin of 0.32% during February 2020.

On a year-on-year comparison, the car sales did show a little bit of improvement but failed to make any significant rise during the last month. The auto manufacturers in the country are struggling for almost a year now. The situation also doesn’t seem to improve drastically in the coming days amid the spread of the Coronavirus across the globe. At this time, we have the sales stats for the eight months of the ongoing fiscal year 2019-20.

The sharp drop in car sales began on the back of the rising value of the US dollar against the local currency and the imposition of several taxes and duties by the government on locally produced cars. Car prices surged surprisingly in the last year, and consequently, the purchasing power of the consumers received a major blow. Due to the low demand in the market, the auto manufacturers were also forced to halt their production for several days during the first six months of the current fiscal year.

Let’s quickly move to each segment of cars to discuss how they performed in February 2020 as compared to its corresponding period last year. Note here that all the stats in this story are taken from the website of PAMA.

Passenger cars of 1300cc and above:

Cars above 1300 cc are considered as a high-end category in the country. Perhaps there are not many options in the local market when it comes to passenger cars in this segment. Currently, the top 3 Japanese automakers in the country produce cars above 1300 cc in Pakistan. It includes Honda Atlas, which produces its City and Civic models. The company releases combined sales stats of both its cars.

During February 2020, Honda Atlas sold 1868 units of these two cars as compared to 2950 units in the same period last year, thus showing a drop of more than 36%. In the first eight months of FY 2019-20, the company observed a decline of nearly 63%. On the other hand, Toyota Indus produces its famous Corolla model in this segment, for which the company managed to sell 3715 units in the last month.

In February 2019, the automaker sold 4945 units that suggest a drop of nearly 25% was observed during the last month. So far in this fiscal year, Toyota Corolla sales have gone down by more than 50%. Suzuki Swift, the 5-door hatchback from Pak Suzuki, witnessed a drop of nearly 46%, with only 186 units being sold in February 2020. Overall, car sales in this category went down by nearly 30% in the last month, while a drop of 55.8% was observed in the eight months of FY 2019-20.

In passenger cars, the 1000 cc category is the most anticipated segment due to its price range. Unfortunately, there are very few cars being produced in this segment in Pakistan. KIA Picanto is the latest addition to this segment. The sales of Suzuki Cultus went down by 16.7% as the company managed to sell 1535 units in the last month, while its overall performance in this fiscal year shows a decline of more than 33% on a year-on-year basis.

Under the 1000 cc segment, Suzuki Bolan sales were down by more than 56%, with just 719 units sold. On the other hand, the 660 cc Alto of Pak Suzuki in this category ended the last month, with 1620 units being sold.

The beginning of 2020 hasn’t been encouraging for Pak Suzuki. The top-selling 660 cc Alto lost its charm in the first two months of 2020. During February 2020, the small hatchback recorded its lowest number of sales ever since its launch in the local market back in June 2019. The company only sold 1620 units last month that sums up the total sales of Alto to 27,072 in this fiscal year.

Suzuki Cultus sales were also down by 16.7% last month on a year-on-year basis. Similarly, Suzuki Wagon R sales received a major hit yet again as the company sold only 699 units in February 2020, down by 71.1% as compared to its corresponding period last year. The sales of Bolan and Ravi dropped by nearly 56% and 63%, respectively.

The top-seller of Toyota Indus Motor Company (IMC) continued its struggle during the last month as well. Although the company sold 3715 units of Corolla yet the decline was nearly 25% as compared to the same period last year. Its overall sales have dropped to more than 50% in this fiscal year. The compact SUV Fortuner also witnessed a drop of 36.44% in its sales during the last month.

Honda Atlas has lost a considerable market share due to its dropped sales of Civic and City sales. The company sold combined 1868 units of these models in February 2020, down by more than 36% as compared to the same period last year. The overall decrease currently stands at nearly 63% in the current fiscal year.

Honda BR-V, on the other hand, yet again, had low sales with just 273 units.

The overall sales of Honda Atlas decreased by nearly 35% during February 2020 and just above 61% during the current fiscal year.

The sales of trucks and buses remained affected due to the economic slowdown process in the country. Just 338 units trucks were sold in February 2020 as compared to 526 units in the same period last year, down by 35.74%.

On the other hand, a rise of 73% was observed in the sales of buses with just 64 units being sold last month. The overall sales of trucks and buses have declined by more than 28% in the last month.

In this segment, Toyota Fortuner and Honda BR-V both struggled to recover from their dropping sales. A decrease of 36.44% and 17.52% was observed in the sales of both these vehicles, respectively. The overall drop was observed as nearly 27% during February 2020.

The overall pick-up sales in Pakistan went down by nearly 35% in February 2020. Among these, Suzuki Ravi sales went down by 63% while the sales of JAC and D-Max pickup dropped by 13.7% and 74.8% respectively in the period under review. The only positive prospect remained Toyota Hilux, which sold 132% more units during the last month as compared to its corresponding period last year.

The least affected sales in tractors belong to Massey Ferguson as it sold 2020 units during February 2020, down by 16.25%. On the other hand, the sales of Orient and Fiat tractors decreased by 58% and 30%, respectively. Orient IMC only sold 15 units of its tractors during the last month. The overall sales of tractors went down by more than 22% in February 2020.

Motorbike sales have generally shown development due to the high-rising prices of cars in the local market. A majority of motorbike manufacturers couldn’t increase their sales on a year-on-year basis but managed to reduce the deficit.

Atlas Honda sold almost the same number of units in February 2020 as it did in the same month last year. Its overall sales during the current fiscal year have dropped by 4.58%.

Similarly, Suzuki and Yamaha witnessed a drop of 7.79% and 19.85% in this period, respectively. Road Prince also recovered its sales as it sold just 0.98% fewer units than its corresponding period.

United motorbikes remained popular during the last month as the company sold 37.49% more units in February 2020.

The overall motorbike sales have shown a growth of 0.32% in February 2020 and only facing a deficit of 9.68% in the ongoing fiscal year now.

Although the last month was the worst-ever for Suzuki Alto as it sold its lowest 1620 units yet leads the top-selling chart during FY 2019-20 in the country. It’s followed by Toyota Corolla with 18,902 units being sold in the eight months of the ongoing fiscal year. Have a look at the leader board for further details.

That’s it from our side for now. Stay connected with PakWheels for more statistical updates related to the automobiles in Pakistan. Drop your thoughts in the comments section below.