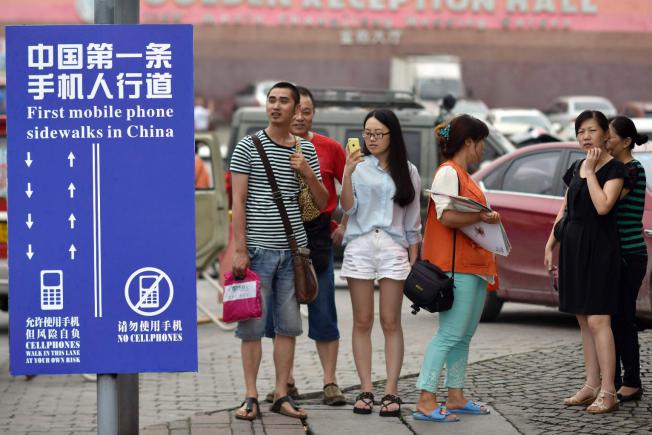 Cell phone usage has grown so much that we can call it obsessive, its usage has costs lives; paralyzed many, people become mindless drones while on the phone; unbeknownst to their surrounding, their heads indulged deep into the screens of their phones. We have seen countless videos on youtube but people will be people and China knows that and has introduced a solution.

The solution is simple; China has made the first ever separate foothpath (also: sidewalk) for those who can’t be bothered enough to look away from the screens of their cell phones and ahead of them.

“There are lots of elderly people and children in our street, and walking with your cellphone may cause unnecessary collisions here,” said Nong Cheng, the marketing official with Meixin Group, which manages the area in the city’s entertainment zone.

Meixin has marked a 50-meter (165-foot) stretch of pavement with two lanes: one that prohibits cellphone use next to one that allows pedestrians to use them — at their “own risk.”

However, there’s a catch. The city officials and property developers say that the footpath in the entertainment zone is designed to remind me people of how dangerous it is walk about while completely indulged in their cellphones.

People in Pakistan haven’t come to that point, especially Karachi since every footpath is taken by billboards of brands and also the fear of getting your cell phone snatched.

PakWheels Karachi Auto Show was a celebration of automotive cultures