Honda Atlas finally launched the facelift version of Honda Civic and the RS Turbo variant on 9th April 2019. It was a much-anticipated launch, however, not everyone was impressed. The changes made in the 10th generation of the car do not make it an entirely different unit as in the case of Corolla when Toyota Indus introduced its facelift. The record-selling Civic X is available in three variants in the local market i.e. 1.8 i-VTEC, 1.8 Oriel i-VTEC, and the reintroduced 1.5 RS Turbo version. Civic X is an important member of the Honda family as it has achieved several milestones due to its powerful engine, outstanding performance, excellent fuel efficiency coupled with advanced technologies. It also won the “Car of the Year” by People’s Choice award in 2017 and 2018 which also reflects its performance in the auto market.

Honda had discontinued its 1.5 Turbo variant due to several cases of engine problems because of the poor quality of fuel available in the market. Now, as the company believes that the fuel quality in the country has improved, it has introduced the Turbo variant once again as RS (Road Sailing) Turbo which is developed under the Honda’s ”Earth Dreams Technology”. This advanced state of the art technology platform provides a more responsive and powerful driving experience under an improved fuel economy. However, it’s hard to predict the success of RS Turbo variant in favor of Honda because the customers who have previously experienced the pathetic engine problems would certainly lack confidence in buying something similar again. However, a majority of Honda lovers are curious to learn the additional features added by the company in the facelift version of Civic X. It is pertinent to mention here that the auto manufacturer has also increased the price of all the 3 variants. But does it justify under the added features?

The base model of Honda Civic X hasn’t got enough changes to be called a facelift. The company has only managed to add a cruise control option in the car along with retractable side mirrors. This sums up the facelift version of the 1.8-litre i-VTEC variant. The above-mentioned, couple of changes will cost the customers Rs.65, 000 more from now on wards as the new price of the base model has jumped from Rs.3.134 million to Rs.3.199 million.

The majority of changes have been made to the top of the line trim 1.8-litre Oriel i-VTEC in which the customers will now get LED headlights with DRL which enhances the ability to see the road clearly. The fog lamps have also been equipped with an LED version with chrome lining. A chrome strip is molded into the front and rear bumper of the popular sedan which gives it a fresh look on the exterior. Honda has also installed the body colored shark fin antenna in Civic X facelift which also gets a new pair of 16” alloy wheels. The LED tail lamps give a stunning look to the already aggressive in nature rear lights. So, the facelift model has undergone some exterior changes only. The changes made to the existing Civic X will cost Rs.100, 000 in addition to the previous price tag of Rs.3.299 million. 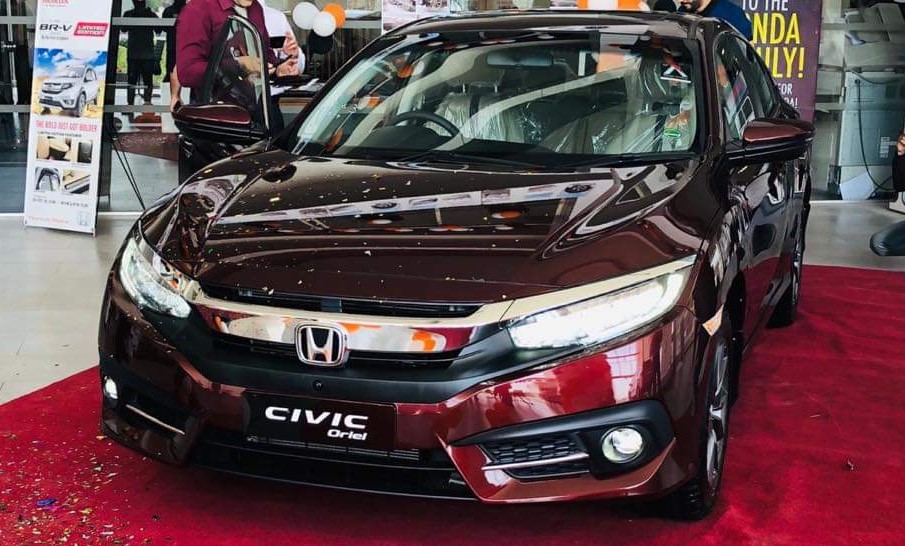 The re-launch of the Turbo variant of Honda Civic X has been the big story so far. The RS Turbo will have to pass the test of time due to its previous record of engine problems in Pakistan. Honda might not see booming sales of Turbo variant straightaway in the local market due to the consumers’ previous experience with this variant. The all-new 1.5-litre RS Turbo is equipped with a VTEC Turbocharged engine mated to a responsive continuously variable transmission (CVT) with paddle shifters. Nonetheless, the company has made a few exterior changes to the 1.5-litre i-VTEC RS Turbo variant. The car is installed with a sporty trunk spoiler with LED in the middle of the C-shaped LED tail lights. The front gets a Piano black sporty grille with LED headlights and fog lamps. The distinctive feature of RS Turbo with the 1.8-litre version is the 17” alloy wheels instead of the standard 16”. The door handles are chrome coated in the Turbo version. The dual exhaust pipe finishers help optimize the air flow. The car also gets an RS emblem to the front and the rear side. Honda Civic RS Turbo also gets a new Engine Control Monitor (ECM). The interior of the car has a black theme as the seats get a red stitch lining to give a sportier look from the inside. The updated version has a trunk cover with an additional option of a modular kit for the customers. The remote engine starter allows a driver to start the engine even before entering the car with the push of a single button.

Let’s have a look at a few prominent features of Civic X along with those added in the facelift and RS Turbo variant.

Is the Price Justified for RS Turbo?

We have already mentioned that there is a huge question mark regarding the market of Civic Turbo variant in Pakistan. Unless the company has made drastic changes to its engine, there is very little chance of success for RS Turbo. Furthermore, it’s important to discuss the matter of possible reversal of 10% FED on local cars of 1700 cc and above engine capacity. If the government withdraws the excise duty, it would leave a massive impact on the difference of price between the standard and turbo variants. Let’s do some price calculations of the 1.8L i-VTEC Oriel variant. Its new price is Rs.3.399 million and if the 10% FED is waived off, its price drops to Rs.3.059 million which means that its difference with the Turbo variant extends to nearly Rs.740, 000. In my humble opinion, this is a huge difference provided the features in both cars are the same, which doesn’t justify the price at all. 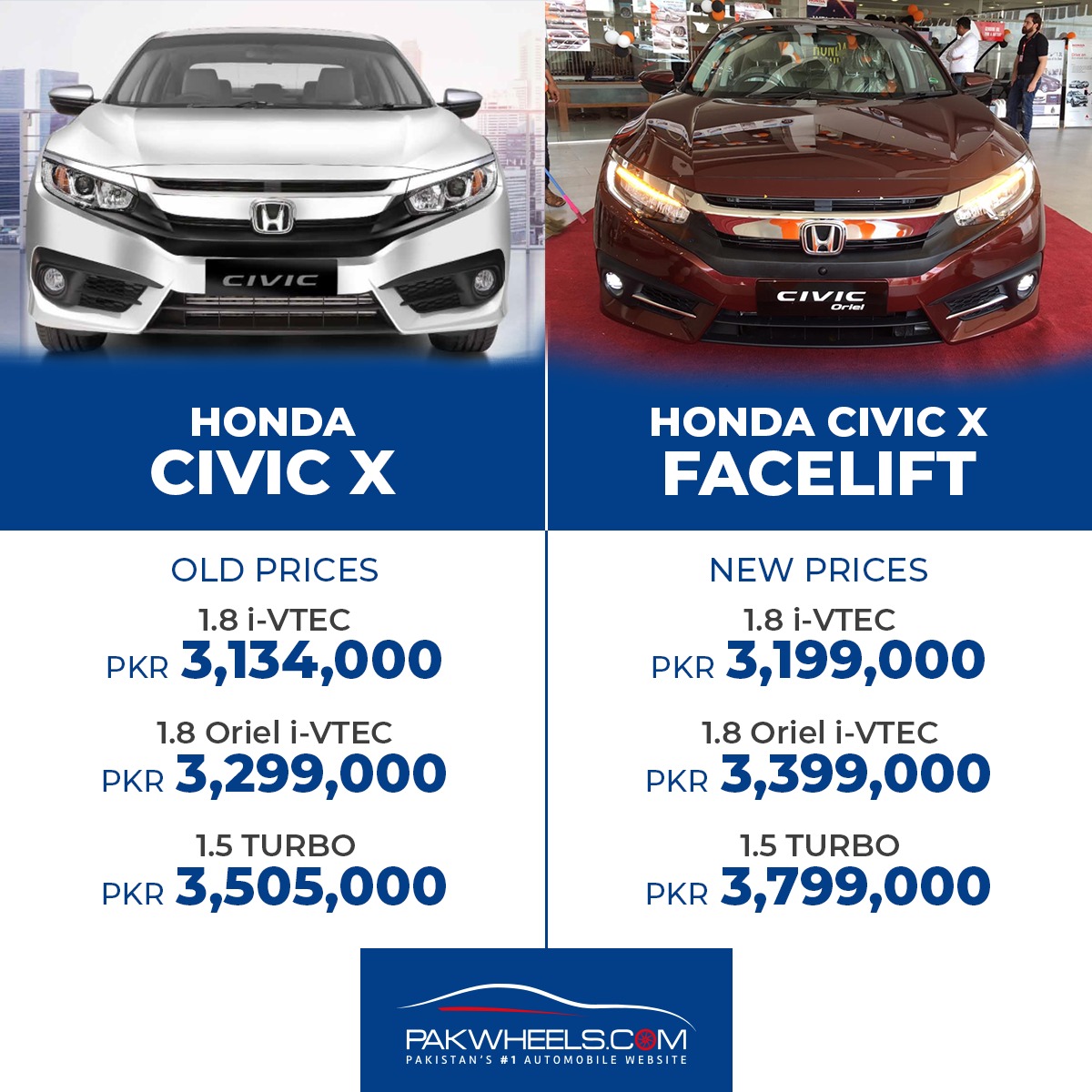 What are your thoughts on the facelift version of the Honda Civic 10th generation? Your comments in the section below would be highly appreciated. Stay with PakWheels for more relevant updates.

Upcoming PAAPAM Show To Be Packed With Surprises?