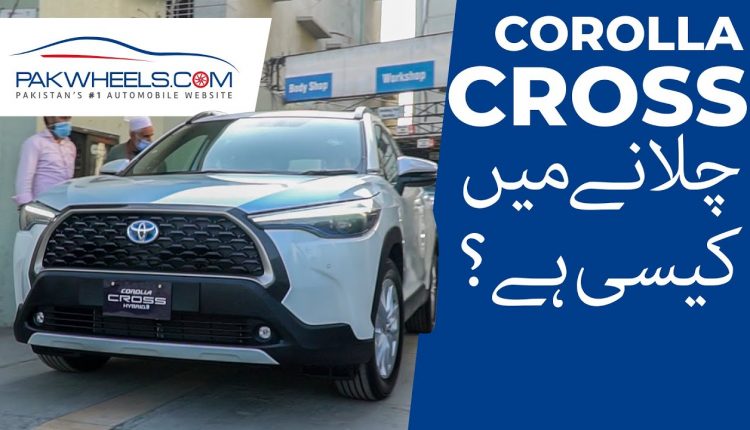 We are here with the first test drive review of the recently launched Toyota SUV, Corolla Cross. The company is selling only CBU units of this car in Pakistan as it has no plans to assemble it locally. The vehicle has been launched at a time when Pakistani market is thriving with sales and launches of crossover SUVs for the last couple of years.

However, Cross is different from other SUVs because it is the first Hybrid vehicle in its category. It is pertinent to mention that under review vehicle is top-of-the-line variant of Cross.

The car has a 1800cc Toyota 4th generation hybrid engine, and its technology is designed on Toyota’s new global policy of TNGA, and it is based on Corolla 12th generation. If we talk about the power of its engine, it is very optimal. It is neither underpowered nor extraordinarily powerful. You will get your money worth with the engine power of this vehicle.

The company claims its fuel average is between 20-22km/liter, and it is mainly because of its hybrid engine. This average is almost double than its competitors.

The new Corolla Cross has four driving modes, i.e., Eco, Power, Normal and EV. In the EV mode, you can drive the car only on the charged battery, but it is for a limited distance and limited time. Meanwhile, you can use other modes at any time.

The crossover has 7 airbags, ABS + EBD, traction control, cruise control and downhill assist. The last feature will lock your car on a lower gear, making it very safe to drive in the mountains. Furthermore, its electronic steering wheel is speed-adjustable, making it safer.

Its interior is quite similar to Toyota C-HR, which is another hybrid car, especially the dashboard design with Bruno leather. The driving seat is 6-way electronically adjustable. Furthermore, it has a 7-inch MID display, which gives all essential information, including battery power status and distance to the end. Also, the steering comes with control switches, which makes your driving experience very easy.

The company has installed dual-zone climate control with rear air AC vents. If we come to the seating capacity, both front and rear seats have ample leg and headspace.

The audio unit has a rather unique design, a mixture of classic and modern design. The unit has buttons on the side and a touchscreen. We will tell you about its efficiency in the expert review of this car. The company has also offered a sunroof in this top of the line variant.

If you want to know more about Corolla Cross, visit PakWheels New Car Section, where you can read about its variants, on-road prices and major features.