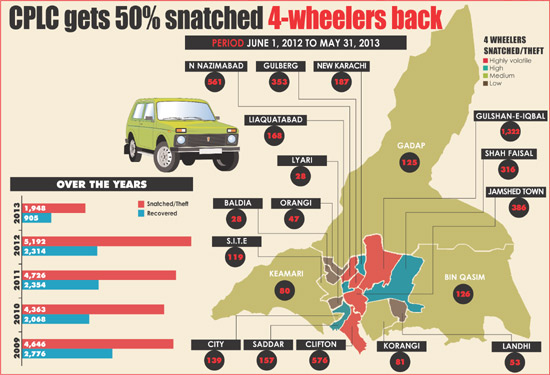 We usually think that no good would come even if we reported a stolen car well according to these statistics collected by The Daily Times, City Liasion Police Committee recovers half of the cars that are stolen in the financial hub of Pakistan, Karachi.

So good do comes through however, many victims of snatching and robbery do not report the incidents to avoid hassle of going through the lengthy justice system of Pakistan, meaning the statistics provided are only based on those who reported the theft.

As per the statistics released by CPLC, 26,898 vehicles have been stolen from January 2009 til May 2013 and CPLC claims to have recovered almost half of them.

A record 6,023 cars were stolen in 2008 but numbers aren’t provided about how many of those stolen were recovered nonetheless, such statistics reflect the performance of law enforcement agencies and a recovery rate of around 50% should push people to always report a theft.