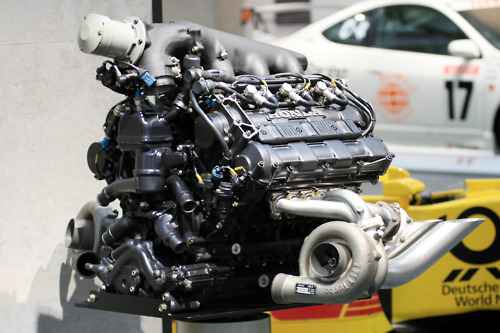 In an auto-sports enthusiast’s realm the digits followed by the letter ‘V’ have always held a special place. The rule has been pretty simple, the higher the number the better. Even today, amid rising fuel prices and global warming concerns, when auto-manufacturers are looking towards efficient engines and other alternatives, the auto-enthusiasts however feel that  motor-racing as a sport will never be the same. Its like watching your favorite rock band from the 70s grow old and eventually die.

Why, because the internal combustion engine is one of the most beautiful piece of machines ever created. The synchronized movements of all the parts, the blasting cylinders and those dancing valves give your traditional engine a sort of sophistication that an electric motor can only dream of. Well, yes many petrol-heads are not inclined towards saving the world by replacing the engine with an electric motor. An electric car for them is still a scaled up version of a toy. Because for something to be classified as an automobile it must have an engine that runs on fuel. That’s how things have always been and that’s how they should be.

Besides, there are other far more dangerous polluters of the world. Electric turbines for example. So, why target cars? More specifically, why target race cars? Can those few race cars running for a few hundred miles save the world by burning less fuel?

From next year, Formula 1 cars will no longer be powered by naturally aspirated 2.4L V8s. Instead they’ll be powered by a much smaller 1.6L V6 turbocharged engine. The first thing you’ll notice when listening to a V6 F1 engine is that it just doesn’t sound right. First, there just isn’t enough bang and then there is the whine of the turbo. Someone who has adored the beautiful sounding V12s, V10s and even the V8s, the sound of the V6 is enough to lose faith in the sport.

There is probably no point in contesting the argument of those in favor of greener cars because their position is also not completely wrong. Having a smaller engine doesn’t mean cutting down on power. Due to advancements in technology, the turbocharged V6s would soon evolve into even more powerful engines than the current V8s. As for the sound, well one would have to get used to it. But then one also gets used to things one doesn’t like very much and that doesn’t make those things ‘interesting’.

Then there is this talk about an all electric Formula1 Championship. One wonders what it would be like watching 24 so called ‘cars’ circling around a track like silent ghosts. Once can only wish if everyone could understand what a beautiful sounding engine means to an automobile enthusiast.

Battery powered Formula1? Give me a nice pillow and a book to read at the track. Hoping Formula 1 does not lose any fans next season.