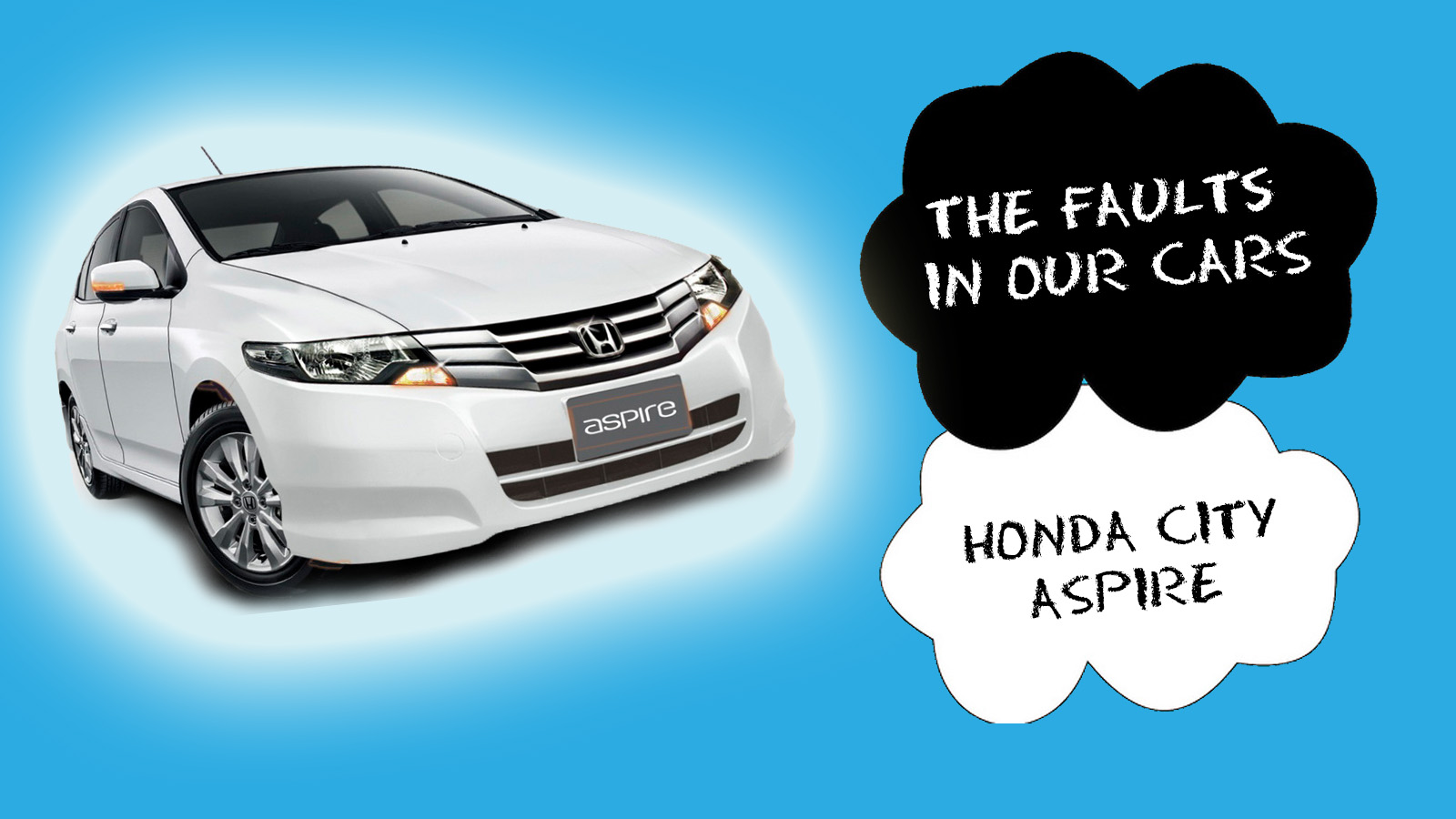 The Faults in Our Cars: Honda City Aspire

Remember the last time I carved out an article? Yes, it’s been a while, but I’ll try to make some sense today.

Everyone wanted the next episode, well; here I am today, writing it down for you. The next installment of The Faults In Our Cars Series. It took this long because I had a transfer. I’m not back yet but my respected manager sahib allowed me the liberty to do anything I wanted to with the keyboard, just for today.

RELATED: The Faults in Our Cars: Suzuki Cultus

Coming to the point, the car I’ve chosen to discuss today is the Honda City. The latest version which is offered in 4 variants, all based on the same stiff and uncomfortable suspension, which are made further inconvenient to ride in by being fitted with hard seats. I wonder what is wrong with the automakers. Soft seats are a sin for us to be provided with?

Launched in 2008, the 5th generation Honda City was a completely revamped unit and now had a very sleek, stylish and a modern look. Well, talking about modern, the only locally manufactured car in Pakistan which comes with projector headlamps is the Honda Civic, which too has halogens in it, so, back in 2008 it was modern enough for Pakistan. Placed in the mid-sized sedan category, the City became a popular car among doctors (I don’t know where this thought came from). Initially, the City came in just 2 trims, 1.3l iVtec with an option of 5-manual or 4-automatic. Later, a 1.5l Aspire variant was introduced which came with leather seats (HAHA), multimedia NAV system, 15” alloys and side-mirror integrated turn indicator lights. Moreover, the automatic versions of the City had a new gearbox, a Prosmatec from the earlier and current Civic.

I got an Aspire 1.5 Prosmatec because I wanted a car which looked reasonable, performed well, doesn’t tire me in the friendly traffic of the beautiful Lahore and be economical. I realized just after 2 weeks of owning it that the fuel economy is just a myth here in Pakistan. Legends say the faithful Honda City in Thailand returns up to 20 km/l to their loving owners. It’s partly because of their efficiently engineered engines and partly because they run on a CVT gearbox, which is lighter and far more efficient than the current ‘Prosmatec’ gearbox.

My Aspire has been driven 10k kilometers to date, with more than 20k bad feelings in my heart for it. The so called Multimedia NAV unit remains stuck if a DVD is accidently inserted into it, connecting your cellphone via Bluetooth would take ages, the navigation would surely confuse you if you try to consult it. If you finally go through the mess of connecting your phone, you play the music and the sound quality would literally make your tears fall, and yes, this was just the multimedia/NAV unit which distinguishes your Aspire from a normal City.

The build quality of the car from the inside is also not up to mark. I frequently hear minor rattles from the dash and the rear plastic trims. On the outside, the rubber seals that are fitted on the front screen from the outside have been seen flying vigorously with increasing speed and the technicians at ‘Honda Fort’ Lahore suggested me not to get it repaired as it would involve dismantling the wipers and surrounding assemblies, so I had to paste a bit of clear tape to it to keep the seal from dancing.

I cannot believe I’m writing this about my own car.

Now, the most important part, the suspension. Honda decided give the City such a firm suspension that they brought down the comfort level to that of a Suzuki Mehran. Stiff suspension, made even worse by the wood-hard seating. I wonder what I was thinking while buying the Aspire.

Lastly, coming to the high-end performance of the Aspire. I’ve driven a manual version, it’s pretty much fine but not up to expectations. The engine lacks low end response. Now take that sluggish low-end torque and mate it to a Prosmatec gearbox (which I guess itself weighs more than the car) you get jerky gearshifts, it’ll disappoint your hopes of smoking less powerful manuals from a halt and it would successfully return you 9-10 km/l max in the urban.

Above, I have listed the problems that you can face after spending 1.8 million rupees of your hard earned money. From the baseline to the top-of-the-line variant, these problems can change their nature or intensity. I’m sure you can overcome the fuel consumption blessings if you opt for a manual but I don’t see the point of spending more and getting less than expected..

Everything You Need To Know About Tyre Tread Measurement