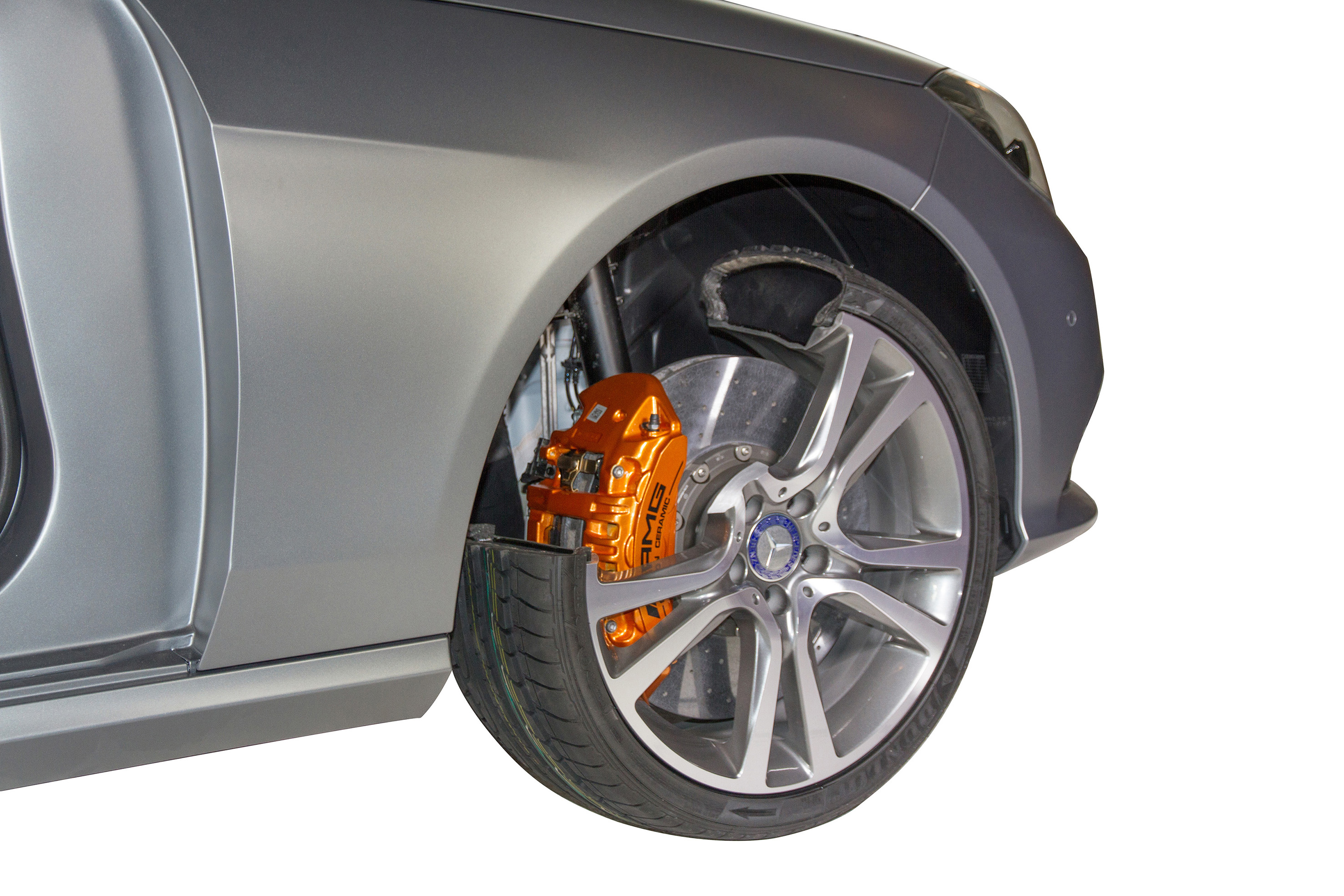 The system of Disc brakes comprises of a disc brake rotor connected to the wheel and a caliper, which is responsible of firmly holding the disc brake pads. Hydraulic pressure exerted from the master cylinder makes the caliper piston to compress the disc brake rotor in between the pads of disc brake. This movement produces friction between the brake pads and the rotor, resulting in reduction of speed or stoppage. New cars in Pakistan, without Anti-lock braking system have disc brakes in them. Currently we have Mehran, Cultus and Wagon R with Disc brakes in them. Earlier, cars in the same category like Coure, Alto and Santro also had Disc Brakes in them. Most relatively older cars we have in Pakistan have front disc and rear drum brakes. Late 2000 Honda Civics and early 2000 Toyota Corollas started to come up with all wheel disc brakes but no ABS. Those Corollas were notorious for locking their wheels and skidding all over the place. The new Honda City comes with front disc and rear drum brakes and is also equipped with an ABS.

Similar to the disc brake, the drum brake is comprised of a twin brake shoes along with a piston. But unlike, the drum brake also has an adjuster component, an emergency brake system and numerous springs. On striking the brake pedal, the piston thrusts the brake shoes towards the drum. Now the question is that what is the use of all those springs? The additional braking power exerted by the lodging movement makes the drum brakes to choose a smaller piston than disc brakes. But, because of the blocking movement, the twin shoe is pulled away from the drum on releasing the brakes. Some springs are used for this purpose other springs are helpful in holding the twin brake shoe in position. Drum brakes have been replaced by Disc brakes to a huge extent. There are not many cars that still have all wheel drum brakes but Suzuki Bolan and Ravi still come with both front and rear wheel drum brakes.

The handbrake in vehicles is a secondary braking system, known as emergency brake or handbrake.

Emergency brake or hand brake is independent of the conventional brakes, and is not motorized by hydraulics. Other forms of hand brake include a stick lever in between the front seats and also a pedal located next to the brake paddle on the left which is now days seen in Japanese cars with dashboard gear or rarely a push button or handle located near the steering. Emergency brakes are most often used as a idling brake to help keep a vehicle stationary on signals or traffic jams.  The main purpose of emergency brakes is in emergency situations where you need to stop the car immediately.

It is one of the best braking systems that is even available in very affordable Japanese cars but we Pakistani’s are deprived of it even after spending 1.1 million on a Suzuki Cultus or Wagon R. Computerized system known as ABS (anti-lock braking system) is an essential safety feature which is installed in the modern vehicles. On applying brakes abruptly, the Anti-lock braking system prevents the wheels from locking and skidding . The sensors in ABS keeps a track of the speed of each wheel and itself throbs the brake pressure on and off in case of skidding is detected in any wheel. Abs ensure safety for driving on wet and slippery roads. Furthermore, ABS decreases the stopping distance while ensuring good control and stability of the vehicle in case of vigorous braking. ABS is considered to be the most popular braking system these days. All Honda and Toyota vehicles have ABS in them. Majority of the Japanese cars starting from 660cc have ABS in them. Only Mehran, Cultus and Wagon R do not have ABS in them. Furthermore, some 2 door models of Mira do not have ABS in them.