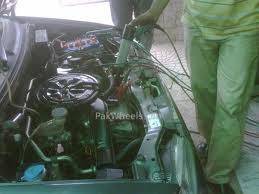 Note: This is applicable to all cars whether they have CNG or not.

I have a 1999 Honda Civic  which has an engine with a distributor and rotor, unlike new cars that have Coil over Plug ignition system ( Direct Ignition) without a distributor.
I wanted to install an Advancer/ Emulator in my car but the mechanics were not approving it as they said that Advancer cannot be installed in this car mainly due to presence of distributor. So i decided to do it myself.

Here is some info about the Advancers & Emulators.

Function of Advancer
It Fools the ECU by manipulating the signals to ECU by various sensors. It intercepts the sensor signals & sends corrected/manipulated signals to the ECU so the ECU Advances the ignition timing as per the sensor signal automatically.
Basically it is installed so that ignition timing of the vehicle remains at default settings for PETROL as u drive on PETROL and automatically advances when you convert to CNG, without having to move the DISTRIBUTOR physically. So the vehicle runs perfectly on PETROL as well as on CNG.

Normal Practice by Local Mechanics
I have seen many EFI cars without Advancer & emulator, (My car was 1 of them). Basically the mechanics cut out the power wires of all injectors so the injectors wont run on CNG. So if u do not wish to mess with the wiring, install an EMULATOR.
They generally don’t install an ADVANCER and set the ignition timing as per CNG & say that u normally run your car on CNG so it is OK but what if we have to run the car on PETROL. It will have less power, jerks, missing and overall crappy engine when running on petrol, unless your retard the timing by moving distributor every time u convert to petrol and again when converting to CNG.
Note: A single loose wire on an EFI car can BURN your ECU costing u Rs 15000-20000.

Types of ADVANCERS/EMULATORS
1. EMULATOR ONLY
2. ADVANCER ONLY
3. A 2-in-1 ADVANCER/EMULATOR

Installing an EMULATOR only is no problem. It normally has a blue wire which is connected to the blue power wire of CNG Kit solenoid in the engine bay. The black wire is grounded with body and the original holders of injectors are pulled off and plugged into the plugs of EMULATOR and Holders on emulator wire harness are plugged into the injectors. (a 5-Minutes job)

Installing a 2in1 ADVANCER/ EMULATOR
I have seen many different brands but most of them are local made with Chinese chips. Don’t worry even they have different varieties. A good Chinese one will do the job As it did in my case i bought a TOMASETTO LOVATTO NEW CIP5 in Rs 1800.

You only have to get the correct wiring harness along with it according to your cars brand which you have to find out are the wires from your MAP/MAF sensor & TPS (throttle position sensor).
These wires can be found with the help of a voltmeter. You have to find out the wire that gives variable signal to ECU b/w 0-5 volts.
An easy way to find out the wires is to download the service manual of your car, if you don’t have it already, Google it because the manual will tell you the location of both sensors and the wire you need to know.
Just cut the Signal wire of MAP/MAF sensor and connect with the device wiring as per the diagram below. Than find the wire of TPS but don’t cut it, only peal it a little & connect the yellow wire as per the diagram.
Connect the BLUE wire to power 12v of CNG solenoid;
Ground the black wire to the body;
Connect the holders of fuel injectors as described above,
And you’re done! 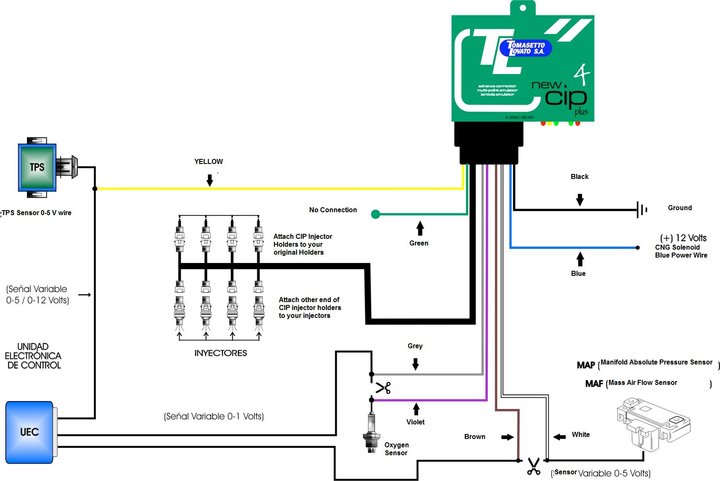 Now switch ON the IGNITION. No lights will be there on the device. Now start the engine and switch over to CNG. The lights on the device should turn ON.

Description of LEDs
RED (right most) is the indicator for advance activated and it should turn ON when you press the accelerator only.
GREEN (second from right) should be on when idling and not accelerating. The red light will be off at that time.
Forget about the remaining three lights on the left if you have not connected the oxygen sensor.

FINE TUNING
1. Now its time for fine tuning your system. Let the engine run till the time it reaches its normal operating temperature or the radiator fan turns ON.

2. Get your timing light if you have one, and set the ignition timing on factory default by moving the distributor if required. The timing must be set to factory default and engine must be running on petrol (not CNG).

3. If you dont have timing light then go to any mechanic and tell him to set the original timing on petrol. Just a 5 minutes job. Should be free.

Now turn your engine OFF and set the 4 switches on the device as under:
1. ON (down) (OFF for standard advance on all speeds, ON for Dynamic advance as per the vehicle speed).
2. OFF (UP) (only works if oxygen sensor connected).
3. ON (down) (only works if oxygen sensor connected).
4. (UP) ( down for dynamic advance adjustment OFF and UP for dynamic advance adjustment ON).
5. Now Start your engine & switch over to CNG. The lights should turn on.
6. At idling, only green light should be ON, when accelerating, only red light should be ON. If it is like that then you’re done and enjoy the drive.
7. If the red light is always ON or turn ON after increasing lots of acceleration than adjust the advancer with the help of a turnable switch inside the RIGHT MOST HOLE beside the red light.
8. Let your engine idle and insert a small screw driver into the hole & turn the screw fully right or left until the Green light turns ON. Then very slowly move it in reverse direction until RED light turns on. Now at this position move it slightly back so that the GREEN light is ON again but dont move any further.
9 Now the setup should be like this:
– Green light ON when idling on CNG
– RED light must turn oN when u start pressing the accelerator.
Everything is done & ready. ENjoy ur ride on PETROL as well as on CNG alike.

Advantages which I got
1. The low power situation on CNG was solved.
2. Car runs smoother on CNG as well as petrol without missing , jerks etc.
3. More mileage.
4. Solved idling problem on CNG
5. Bogging/ low power till 1500 rpm vanished. i can now move the car with AC ON even in 2nd gear from hault.