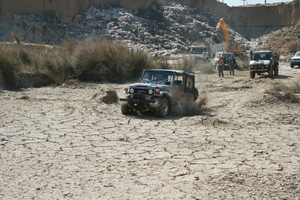 Freeways, highways, better urban road infrastructure was built to avoid getting stuck but we still do and it is annoying, frustrating, disturbing, boils up tempers – essentially, road rage is an exhibit of people being stuck in either slower traffic or one that moves none at all.

Than there are folks who hunt for places to get stuck, it is considered the most fundamental part of the sport. How much experience, knowledge and skill you have is not judge on how well you avoid getting stuck in a terrain – but it is judged when you start digging your way out of it.

Bystanders, self-proclaimed gurus and posers all suddenly become mobile-wikipedia – full of tales and history of off roading, getting stuck and moving out – all alone, in their 2WD trucks and cars.

Than there are people with a sane voice, asking atleast one vehicle to stand in the clear instead of just jumping in the quicksand. They are the voice of reason who sent out the Hilux to fetch extra tow ropes, d-links, and anti-slip mats.

When your motive is to master the art of digging your way out, there has to be one silly yet mad person who takes the initiative to get stuck, like the Silver/Gray 40 who went in first and just a minute later – it’s wheel dug a grave for it to rest untill the traction is resurrected by – what everyone thought to be the lifeline. The Mog.

But sometimes, all that experience, and the pleasure to knowing that the Mog stands behind to de-stuck the cars doesn’t help as even if the all eight tires of Mog and 40 combined – moving in the same direction creates a chaotic scene of tug of war.

Mog isn’t built for suicidal missions. Although it was built for men of challenge but reason must be sound enough to execute and when it isn’t – the mission is a failure but in 4×4 Engaged’s case, it was a success as all three cars who went out in hunt to get stuck – accomplished the mission of being stuck.

Keep on pushing it and you’ll be eye balls deep in the quick sand.

The lesson we learned today is that you won’t find digging heavy machinery out in the wild but, if you’re looking to get some laugh and fun in the rush hour traffic, divert off road and party hard until the road’s clear.