The automobile industry of Pakistan comprises of three Japanese auto giants producing vehicles locally for several decades now. The year 2019 marked the entry of various new auto players in the local market under the Auto Development Policy (ADP) 2016-21. The sales of all the existing automakers, however, declined massively during 2019 thus leaving the companies with no choice but to reduce their production due to low demand in the market. The drop in sales was primarily due to the sharp depreciation of rupee against the US dollar and the imposition of several duties and taxes by the government on locally produced cars. Honda Atlas remained the most affected auto manufacturer among the rest in the local market. The sales of Honda Atlas are driven by its popular Civic and City models, both of which struggled during 2019. The company also doesn’t reveal sales stats for both the models separately so it’s impossible to determine which car performed well among the two. According to the recent sales stats released by Pakistan Automotive Manufacturers Association (PAMA), the overall sales of Honda Atlas stood at 27,097 units from January-November 2019 period. During the same period last year, the company sold a whopping 48,625 units, 44.27% more than the current year.

The overall sales of Honda Atlas were dominated by Civic and City combined as the company sold as many as 23,440 units during the 11 months of 2019 as compared to 42,984 units in its corresponding period last year. The sales for these models decreased by a massive 45.46%, most of which was attributed to extremely low sales volumes during the second half of the year. On the other hand, Honda BR-V also didn’t perform up to the expectations in 2019. The automaker sold 3657 units of BR-V in the Jan-Nov 2019 period whereas 5641 units were sold in the same period last year, thus showing a decline of 35.17%.

Moreover, the graph below shows sales stats for all its vehicles in the local market for each month of 2019. The graph reveals a significant decline in sales with each passing month, particularly for Civic and City. 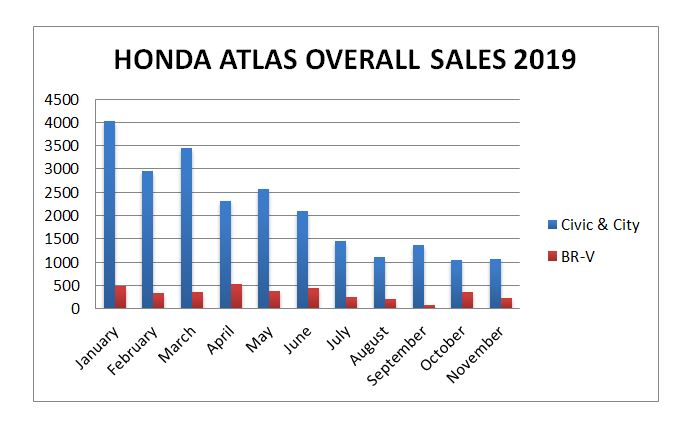 As discussed earlier, Honda Civic and City contribute majorly to the overall sales of the company. The year 2019 started off well for the two models as the sales witnessed an increase of 3.5% in January 2019 as compared to the same month last year. Since then, the sales of Civic and City have kept on going down for the next 10 months till November 2019. The highest decline in its sales was observed during October 2019 when the company faced a 76.9% drop. The overall sales plunged by 45.4% in 2019 on year on year basis which was majorly contributed due to low sales in the 2nd half of the year owing to the imposition of several taxes and sky-rocketing prices. Have a look at the table below for complete details: 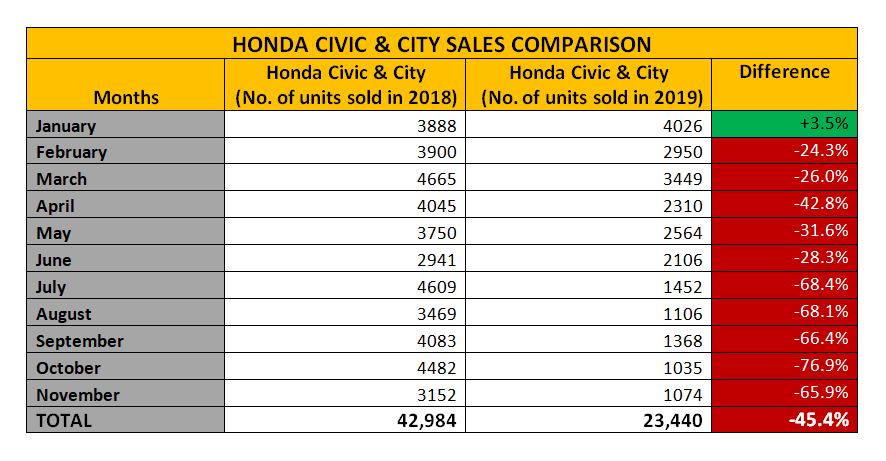 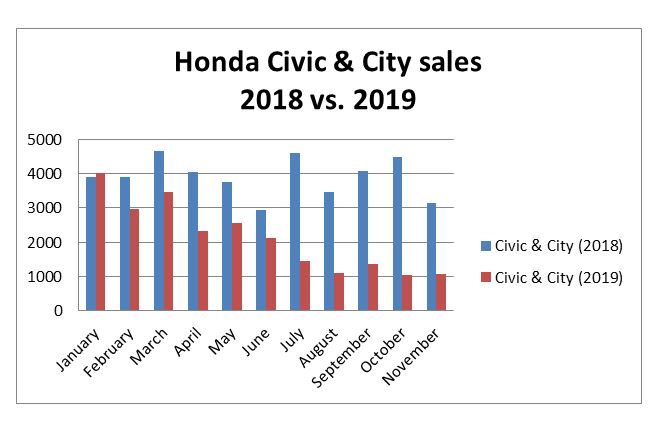 Honda BR-V is a compact SUV of the Japanese auto manufacturer which also faced a plunge in its sales by 35.1% during the first 11 months of 2019. During October 2019, the company only managed to sell 78 units of BR-V which is the lowest sales figure for the vehicle in the last two years. The company also launched a facelift version of BR-V recently, which somehow helped in reviving its sales in the local market but hasn’t performed better than the last year yet. 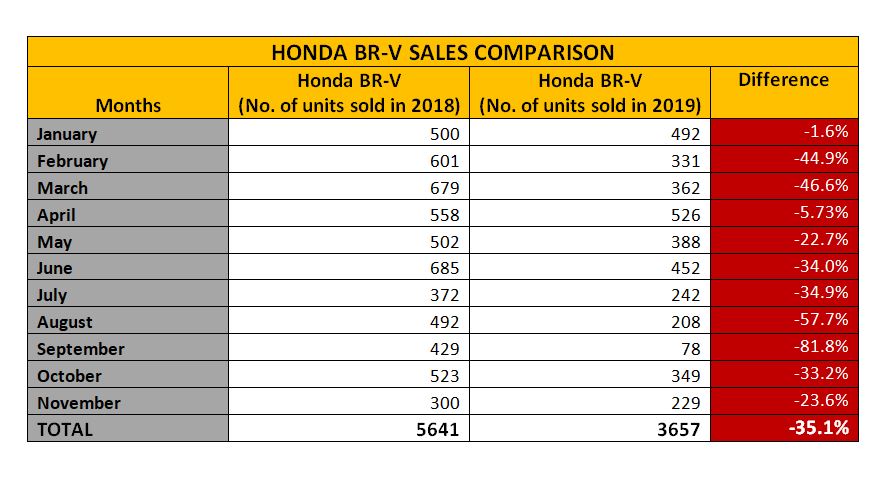 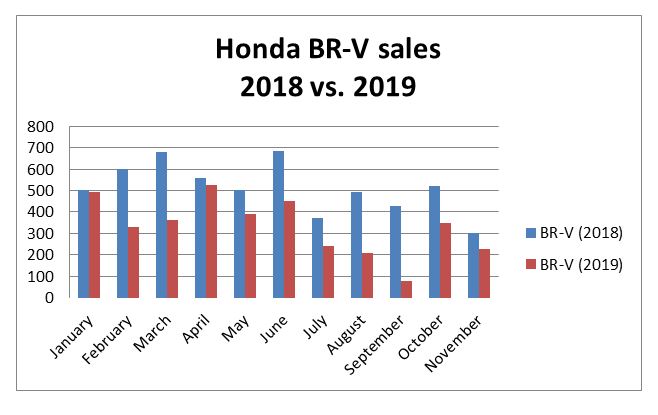 Contribution of each model in the overall sales of Honda Atlas: 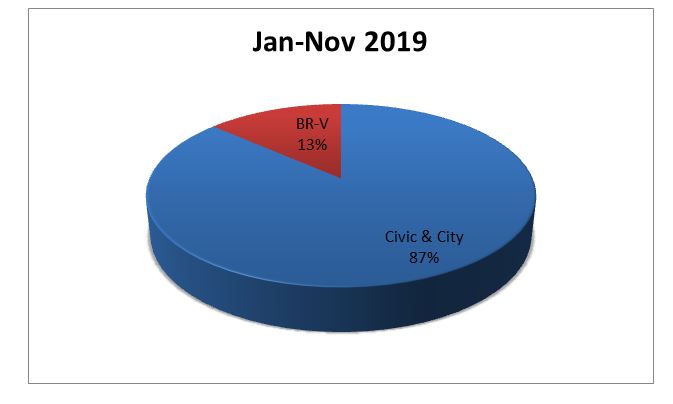 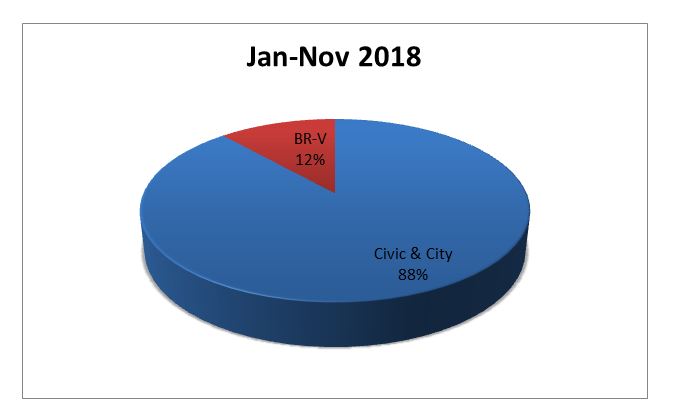 Instead of introducing discounted schemes and reducing prices of its vehicles, Honda Atlas has been at the forefront in halting its production due to low demand in the market. Since July 2019, the company has so far observed the highest number of non-production days (NPD’s) in comparison with Toyota Indus. The company claims a large number of piled-up unsold inventories across its dealerships network in Pakistan. What are your thoughts on the future of the company in the next year? Let us know in the feedback section and stay tuned for more statistical updates on the automobile industry of Pakistan.

What is PakWheels Car Inspection Service & How to Read Its Report?