Honda Atlas Cars Pakistan Limited (HACPL) has announced its financial results for the third quarter ended on 31st December 2019, and it shows a loss of PKR 41 million as compared to earnings of PKR 0.61 billion in its corresponding period last year.

One of the leading Japanese auto manufacturers in Pakistan is in deep waters due to the current economic crisis in the country resulting in a steep decline in car sales. The company just revealed its financial results in its meeting held on 23rd January 2020 for the third quarter starting from 1st October 2019 and ending on 31st December 2019. The stats show that the automaker had suffered a loss of PKR 41 million in the above mentioned period as compared to the same period during 2018 when it earned PKR 0.61 billion. Note here that the financial year of the company starts on 1st April. The automaker also posted a loss per share of PKR 0.29 in the quarter ended on 31st December 2019. In its corresponding period, the company had earnings per share of PKR 4.21. Similarly, the gross profit reduced by 60% from PKR 1.62 billion to PKR 646 million in the third quarter. The administrative cost swelled by just 1% from PKR 171 million to PKR 173 million. In this period, the net sales plunged by 54% from PKR 21.3 billion to PKR 9.87 billion, mainly due to the drop in sales of Honda Atlas by 66% on year on year basis. The other income of the company also couldn’t lift up the earnings due to a drop in the short term investment and cash deposits. The financing cost of cars has also gone up significantly that also dragged down the earnings. See the official notification of Honda Atlas related to its financial results below: 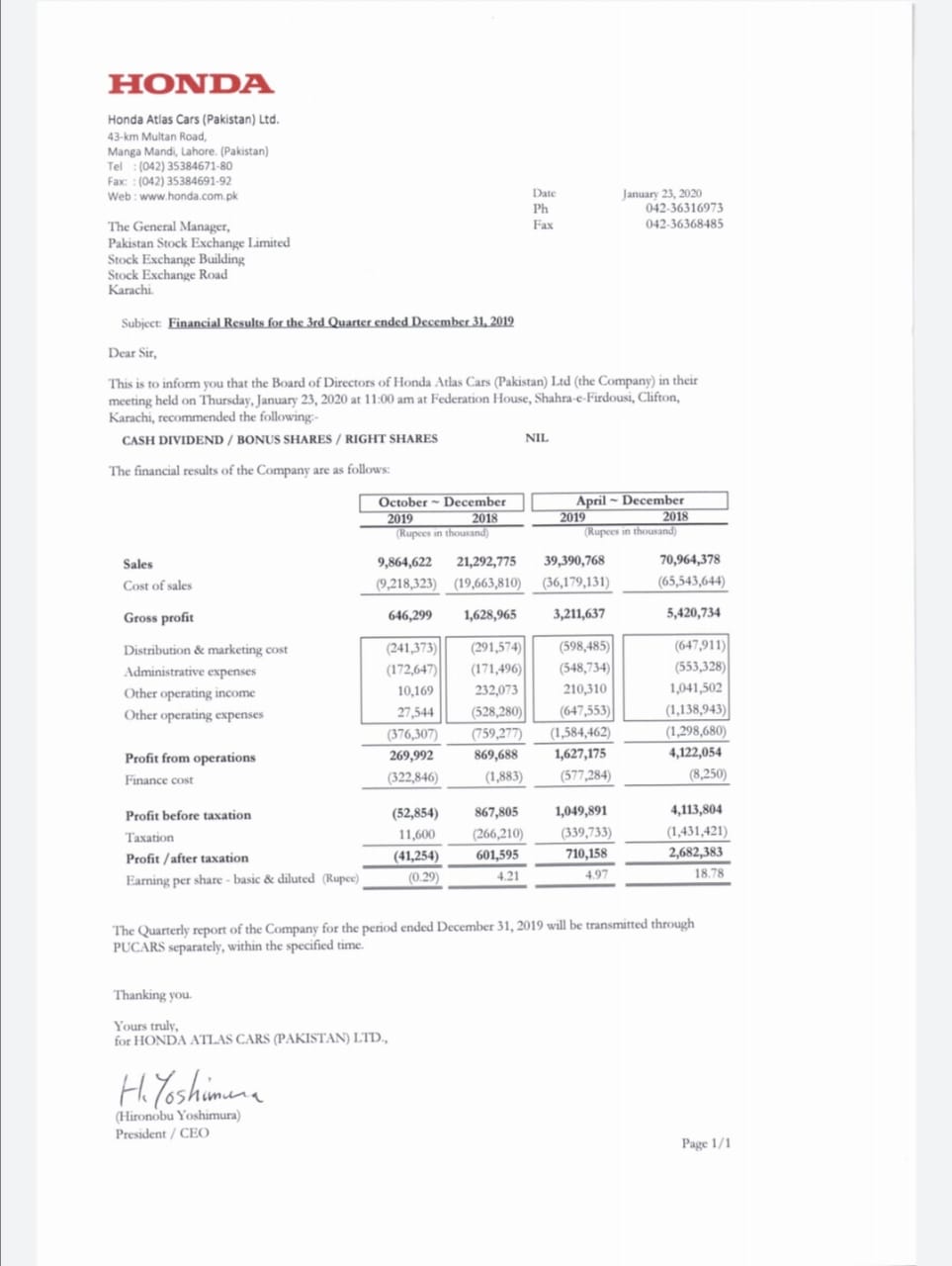 As per the stats, Honda Atlas sold nearly 3700 units in the October-December 2019 period as compared to almost 10,800 units in the same period. Despite the high prices of cars, the company’s gross profit margin remained at 6.6% as compared to 7.7% in the previous year. It is worth mentioning here that Honda Atlas has observed as many as 107 non-production days (NPDs) from July-December 2019 period due to low demand in the market and to reduce its running costs.

On the other hand, the auto manufacturer’s earnings for the nine-month period from April to December also remained on the lower side on year on year basis. The company earned PKR 710.1 million with earnings per share of PKR 4.97 as compared to earnings of PKR 2.68 billion with earnings per share of PKR 18.78 in the same period last year. Such a situation was escalated primarily due to the falling volumetric sales despite the high prices of cars in this period. At the same time, Honda Atlas witnessed a reduction in the cost of sales by almost 45% on the back of stability shown by Pakistani Rupee against the US dollar.

Share your thoughts in the feedback section and stay connected with PakWheels for more automobile-related statistical updates.