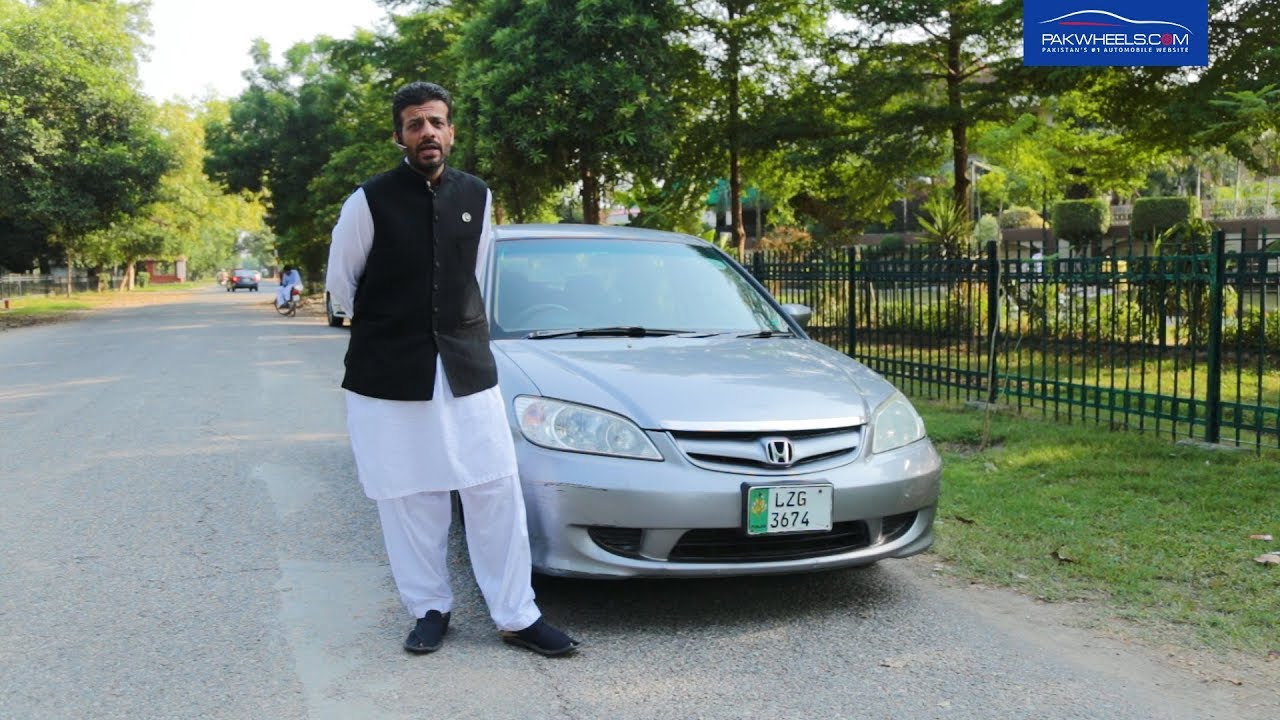 PakWheels.com has brought you another budget car review and this time it is seventh generation Honda Civic VTI (2001-2006). The budget car series is designed to help people in buying affordable cars. Honda Atlas Cars launched this car back in 2001, and the shape of the car remained more or less the same till 2006. Its main competitor was Toyota Corolla and specifically its SE Saloon and 2.0D Saloon variants. Different variants of the seventh generation of Honda Civic were as follows:

The exterior is elegant with a neat and clean design language. All of the VTI variants had alloy rims while EXI variants had wheel covers. Chrome garnish around the windows was present in VTI variants only. From 2004 onwards, the shape of rear lights remained the same; however, crystal ones were introduced later. The car came with power windows and retractable mirrors. There were not many significant differences between EXI and VTI variants in the exterior apart from wheels.

Things that changed from 2001 to 2006 include the alloy rims, headlights, and interior color. Moreover, a new shade of grey was also introduced in 2004 when new wider headlights and alloy rims were included in the exterior upgrade. The VTI Oriel Prosmatec variant came with fog lamps integrated into the front bumper. It also came with a sunroof. The door handles, and side mirrors were body-colored in all of the variants.

From 2001 to 2003, Honda Civic came with black and grey interior. In 2004, the interior color was changed to beige to give it a premium look. Another key feature of the interior was flat rear floor which improved the leg space. The adjustable steering wheel was included; however, airbags were not present in this generation. The driver seat also had a retractable armrest to increase comfortability.

The EXI variants came with a simple entertainment head unit without the CD changer which was present in the VTI variants as well. The boot space of this car was also optimal. Moreover, the headroom in the rear was also sizeable, and the cabin space was enough to seat five passengers comfortably. The meter dials came with glowing needles and rpm meter, speedometer, fuel, and temperature gauges and odometer.

The EXI variants came with a 1500cc engine while VTI variants came equipped with a 1600cc engine. Therefore, the performance figures have been suitable for this car as these engines provided sufficient punch on the road. The suspension was softer than the competitor’s offering at that time. This added to the comfort level of the car. It also came with ABS brakes which enhanced the safety of the vehicle. The soft suspension made the seventh generation ideal for urban areas only, making it unsuitable for rural or rugged terrain. The ground clearance also caused problems over speed breakers and uneven or rural pathways. The off-the-line acceleration of manual variant was better than the Prosmatec variant.

Compared to the competition, the fuel mileage of this generation of Civic was not impressive. The Prosmatec variants returned approximately 9km/l, and the manual variant returned around 11km/l. This shows that the fuel economy figures were a negative point for anyone deciding to purchase the seventh generation Civic.

As far as looks are concerned, the seventh generation of Civic helped it stand above the competition. It was termed Eagle Eye due to the wide headlamps that gave it an impression of an eagle. Compared to other budget cars available in the price bracket of 8 lacs to 12 lacs, the seventh generation of Civic packs more features and offers a comfortable ride. However, the running and maintenance costs will be more than the other budget cars.

The All New BMW 1 Series!