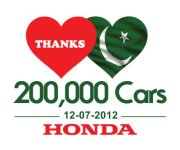 Three largest auto assemblers in Pakistan are Toyota, Suzuki and Honda. While some say that they operate in the country like a monopoly however, rolling out the 200,000th car produced by Honda tells how well the customer has backed up Atlas Honda.

The 200,000 car to roll out of Atlas Honda’s production line was not a Civic but a silver Honda City, a normal one instead of some special edition but we’re not sure whether this would get the 200,000 special edition sticker or not like Pak Suzuki puts on their cars on achieving such milestones.

The celebration event was attended by Mr. Hiroshi Kobayashi, President of Asian Honda Motor and Chief Operating Officer of Honda Asia & Oceania region. Who while speaking on the occasion extended his profound gratitude to all valued customers who stood by Honda in critical times arising out of Japan Tsunami and floods in Thailand. He thanked all Honda customers for making it possible to achieve the landmark of 200,000th unit production. He also appreciated the efforts of all Honda associates who challenged all adversities through no production period. He further said that Honda Pakistan will continue to raise the bar for itself to achieve 300,000 units target in shortest possible time.

We congratulate Honda Pakistan for their achievement despite the predicament economic and security condition where a lot of people avoid buying new cars to keep a low profile yet Honda Pakistan has achieved a milestone of 200,000 cars produced.

We also however hope that Honda Pakistan starts producing cars such as Fit and Jazz for instance, because these are the cars that we actually deserve to have.

Pictures: Suzuki Grand Vitara gets a facelift in Japan