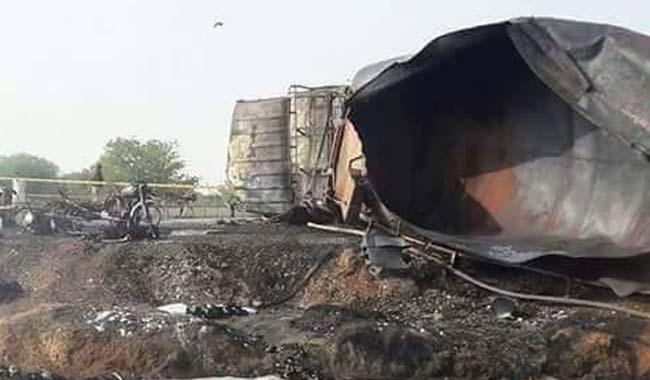 Petrol is the widely used fuel around the globe to run internal combustion engine equipped cars. Obtained through fractional distillation from petroleum it’s is a highly combustible liquid and each year millions of gallons of petrol is transported to different filling stations around the globe. Which is then filled in vehicles for different purposes.

On June 26th an oil tanker carrying 44,000 liters of petrol  overturned  in Ahmedpur East near Bahawalpur due to tyre blowout and  started leaking petrol on the nearby field. Locals rushed towards the  tanker to take benefit from the situation and gather as much petrol as they can . Unfortunately this joy was short lived as the fire erupted from the tanker and resulted in a massive explosion. This inferno engulfed the surroundings including hundreds of people and dozens of cars and motorcycles. Almost 130 people burnt to death on the spot while many suffered 3rd degree burns leaving them in excoriating pain. Since then death toll is  rising and relatives of the victims are in the state of shock as the bodies of their loved ones are not identifiable state.

What has possibly happened!

Eyewitnesses claim that people present at sight were smoking cigarettes while multiple warning from the truck driver didn’t ring a bell for the people busy in  collecting the fuel spread on the sight. The Driver warned the locals of a possible explosion but no one listened to him . Soon the tanker was blown with the explosion and people collecting fuel were burnt alive. Now as mentioned earlier petrol is a highly combustible liquid and even a slightest spark can ignite it unlike diesel. Keeping it very basic, petrol vapors can easily mix with air and dust particles spreading wide in the environment acting as a chain. Lighting a match stick, cigarette from  even the ignition of a vehicle can cause this mixture of air-petrol vapors to ignite spreading very quickly creating a heat-wave and a shock-wave. While the shock-wave knocks down everything which can lose balance but it’s the heat-wave which can kill living beings due to its immense temperature of almost 232 C. Humans flesh stands no chance in such harsh conditions while the presence of petrol in huge quantity means fire can last for hours before it could be controlled. This very same situation happened when some allegedly light up cigarette as reported by witnesses which caused the petrol to catch fire. 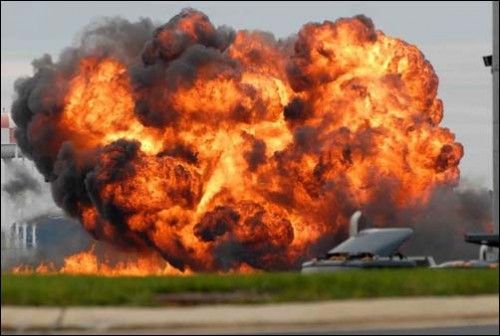 If you find yourself near any similar sight you can follow these safety steps:

It’s sad to see that so many lives were lost in this tragedy. It actually arises few questions. Who is responsible for this accident? Is it lack of awareness, ignorance or poverty that forced  people to risk  their lives just to get petrol worth few hundred rupees? Was it a criminal negligence on part of the driver of the tanker  or the tanker was overloaded with fuel? Do the Oil Companies take all  the necessary  precautionary measures while sending tankers on the roads.   Nothing is more precious than life so it is advised that  don’t risk your lives for short term benefits and always follow the safety instruction and guide others too. Oil Tankers are potential bombs and it’s always a good practice to maintain a safe distance from them while driving.

While the Investigations are still underway to find out the actual reason behind this tragedy ,PakWheels offers condolences to the  families of deceased and urge the Government to run awareness campaign to educate the masses regarding how to act in these kind of situations. Our Platform and expertise are always available to help Government in preparing mass awareness road safety campaigns.

Let us know what do you think is the actual reason for this tragedy.

Here are few interesting tips on tires and alloy rims