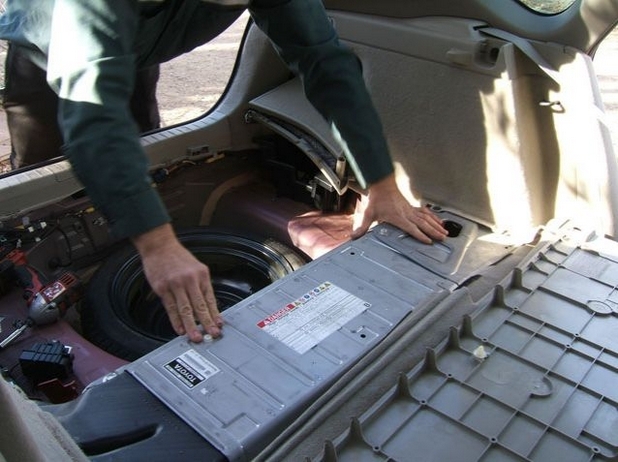 A few days ago, I decided to get the faulty reverse light replaced on my car from a mechanic at Jail Road, Lahore. He specializes in imported cars. I saw a Prius there with its trunk open and battery exposed. As I have a very curious nature and own a Prius myself, I decided to inquire the matter from the fellow Prius owner and the mechanic.

The owner insisted that the battery pack of the Prius was faulty. The car was a recent purchase with registration applied for. On asking how does he know the battery is not working, he replied, the car is giving me less than 30Km/l, so something must be wrong with the battery.

I must emphasize here that even though the Prius is a fuel efficient car and you can expect an average of 20-22 kilometer per liter depending on the type of traffic conditions and your driving habits but do not expect miracles.

Coming back to the topic now, the mechanic opened up the battery pack of the Prius. It had many tiny cells. He inserted some sort of probe into each cell one by one and did his tests and after a while told the Prius owner that the battery was perfectly all right and he did not need to worry about anything. He also told the expected fuel average of the Prius to the new Prius owner as he drove away delighted.

It made me wonder, can Toyota Indus offer some sort of warranty for the dealer/self imported Prius? I think they can and they should as they are importing and selling Prius themselves as well so giving after market warranty would not involve much of a technical investment at their end.

Internationally, Toyota offers a 100,000 miles or roughly 160,000 kilometers warranty for the Prius. This does not mean that the battery will fail once the odometer hits 160,001 kilometers. The battery of Prius is one of the most robust parts in the vehicle, and it is designed to last the lifetime of the vehicle. It has the reliability of the solar satellite, figuratively.

Contrary to popular belief, there have been very few defects related to the battery of the Prius internationally. Some Prius have been used as taxis in many parts of the world, and they have clocked more than 400,000 miles and are still going strong. There is even an experiment performed by Consumer Reports where a 10 year old or so Prius (which had covered quite a lot of distance) was tested against a brand new Prius, and the difference of mileage of both cars was a mere 1 mpg or about 2 km/l roughly. I say this speaks a lot about the performance of the Prius.

What Toyota Indus can do is that they can inspect the car, especially the battery, and if found right, they can charge a specified amount of money and offer a warranty for a certain distance or a time period. If the car does not meet their criteria, they can always suggest what needs to be fixed and/or replaced (caveat emptor), and they can offer maintenance services as well.

Another fuel price cut of up to Rs. 10 per litre on its way for December