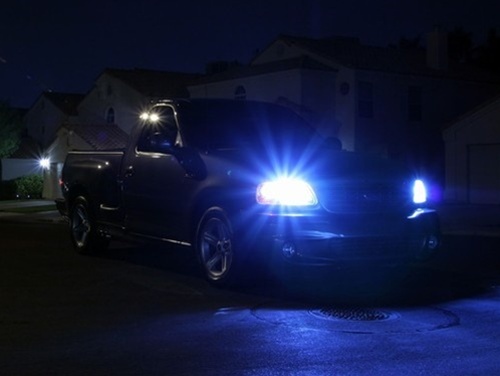 Is it Legal to Install HID Kits in Pakistan?

The trend of installing HID kits in the cars is getting a lot more popular these days. Many people decide to install HID kit in their car, just because they think that it makes them look cool and increases visibility. Since, they consider it cool, very few of them stop and think about safety, legal and ethical standpoint. The purpose of this article is to poke this topic and tell you the truth about HID kits and whether or not they are safe to use.

Before I move on to address the topic at hand, I would first like to clarify what exactly I mean by HID Kits. Here, I am referring to these xenon bulbs that come in a box with bulbs, ballasts and a few wires.

The truth is, HID conversion kits are not only illegal in various countries of the world, but are also unsafe for you, the pedestrians and other drivers on the road. Allow me to explain.

Normally it is easy to make an educated guess about a certain situation and build up your argument from there, but this time I could not make any headway, so I had to consult a friend of mine, who is an automobile engineer by profession. The first fundamental issue of using HID bulbs in a car, which didn’t come with pre-installed HIDs is that the headlight is not calibrated for them. Think of it this way; if your car was fitted with halogen bulbs, its headlights will be calibrated to allow a specific amount of glare to be released above the horizontal line. As this not only helps you illuminate road signs but also gives you a very small amount of light above the projected headlight beam, without requiring to use your high beams. However, when people install HID kits, they do not stop to think about the amount of light being projected above the horizontal plane and into the eyes of oncoming drivers.

To put things into perspective, according to a study published in the American Academy of Paediatrics, older people’ eyes take up to 8 times as long as to adjust to intense light fluctuations, as compared to the younger people. There is a good possibility that this bright light may not affect you sitting inside the car. The story, however is completely different when you’ve multiplied the amount of glare your headlights are producing against the oncoming traffic. A typical 55W halogen bulb will produce around 1000 lumens. By comparison, a 6000K 35W HID bulb will produce around 2800 lumens. You’re nearly tripling the amount of glare that your car’s headlights are producing.

Following is the image of headlight projection from a halogen bulb. Look closely at the light emitted above the cut-off point.

As you can see by the shadows casted on the backdrop, this car’s headlights emit a significant amount of glare above the horizontal plane or ‘cut-off line’. And following is the picture of a car with a 8000K 35W HID kit installed.

As obvious by the light above the cut-off point, the amount of glare is quite obvious. As a comparison, here’ what a factory fitted HID beam looks like through a calibrated lens.

See how distinct the separation is. This is the primary reason which people fail to account just to look cool.

Not many people know this or they just choose to ignore it but the placement of filament is quite different in both HID bulb and a halogen bulb. More specifically, the source of the output (whether it’s the capsule in HID bulb or the filament in a Halogen bulb) is different between the two.

You might be wondering about what’s the reason behind stating an obvious fact. Well to put it simply, this difference changes the shape and projection of the light beam that your headlight housing was designed for. Take a tactical flashlight as an example, as you move the source of the light output farther away or closer to the base of the reflector, the beam changes. Considering that a headlight housing designed for Halogens was calibrated for a specific bulb, it is certain that changing the physical properties of the bulb will negatively change the projection of the beam.

At this point, some of you might be thinking, “Maybe I can aim my headlights downwards to prevent all this glare?” Well you can but then what’ the point with installing an HID kit. As far as I know the purpose of an HID bulb is to provide superior visibility in the dark. If you’re forced to aim your headlights at the ground, you fool your eyes into thinking that your light output is better than it is. Your eyes will automatically adjust their exposure to bright light. If you’ve ever walked into a dimly lit room after being outside on a bright sunny day, you’ll notice that your eyes will take a while to adjust. In this regard, your eyes will adjust to the brighter light, making it more difficult for you to see more dimly lit light off in the distance or on the side of the road. This actually reduces your visibility and can put you in an unsafe situation, should an unexpected event occur, such as an animal crossing the road.

The general rebuttal to all of this is typically “but I don’t care about that. I just want it to look cool.” The notion here is that anyone installing these HID kits is doing so because they cannot afford to purchase new headlight housings calibrated and designed for HID bulbs.

And last but not the least. Are HID kits legal?

To put it bluntly, NO.

HID kits are not legal in majority of the developed nations. Take National Highway Traffic and Safety Administration as an example, they have ruled that HID conversation kits are not only  unsafe, but are also illegal.

For the sake of local context, I had a chat with an officer of City Traffic Police-Lahore, and he stated quite categorically that HID kits are not only unsafe (if wrongly installed) but their use is one of the major causes of accidents at night time. He further added that considering the recent up-rise of installing these kits, the department will definitely be launching reforms to tackle this issue. Although the prep talk by the officer was quite good but the fact of the matter remains that so far there isn’t a law, which addresses this particular situation in our local context.

You can also participate or read the discussion on using HID’s in Halogen Reflectors Housing on PakWheels Forums!