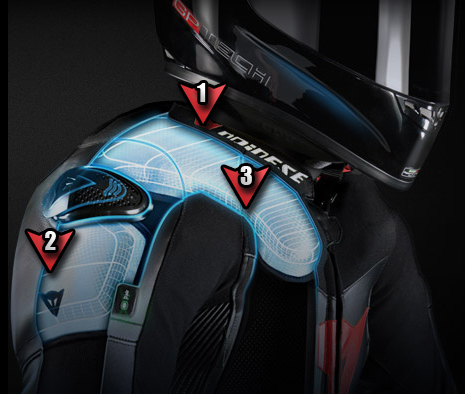 Pakistan does not any kind motorsports event for the the bikers but the adrenaline to be the dare devil is there. The passion is there but since there is no proving ground for the bikers, which the majority of the people in this country are, therefore they take the streets to be their proving ground and perform stunts which if done on a closed circuit with proper safety regulations practiced, could make them a dare devil however, they are just stupid idiots which have no regard for their or fellow commuters safety.

Leather jackets and suits are have been in production for bikers to save them from road rash and other minor injuries if they fall off the bike but the world of motorsports is constantly innovating on ideas to make motorsports even more safe than you and I can think about.

This suit as shown in the picture has been in testing phase since a lot of while in the motorsports arena and finally it has been approved to be sold commercially.

As the picture shows, the suit contains an internal airbag around the shoulders and neck. The suit carries a CO2 cartridge in the aero-hump on the back, as well as an extremely sophisticated computer system that doubles as a data-logger, combining GPS data and accelerometers to give both lap data, and to decide when to activate the airbag.

The hightech suit works as a protection armor/device as well as an impressive track day tool developed on the racetracks by the maestros of today’s top moto GP racing riders such as Valentino Rossi, Stefan Bradl, Leon Haslam and Max Biaggi.

The D-air racing works in synergy with existing armor in race suits and gives airbag protection to shoulders and protection to the neck and the upper chest area.

It’s electronic system can track a fall or a slide and immediately prompts a signal to the gas generator located in the aero-hump of the suit which inflates within 30 milliseconds an internal airbag.

D-air Racing has a patented 3D airbag structure providing the rider with a controlled airbag expansion. It is the only airbag suit on the market that works wirelessly without any connection to a motorcycle.

It also work as an extensive track day tool apart from a safety armor. It features a system features data acquisition software developed by German company 2D (2d-datarecording), which supplies some of the top teams in MotoGP and F1. The software is a source to monitor riding performance and record telemetry data, that can be downloaded and displayed on a computer. Extensive functions of the system include lap time data, GPS telemetry of the bike and diagrams in relation to time: assessment of braking spaces and lines through bends. Acceleration data is also available and the system is compatible with Google Earth and enables plotting of racing lines on a mini map.

The suit cost a huge 4,000 US $ but unlike us, for the rest of the world – its the safety and well being of the rider is that matters however, there is a lack of track in Pakistan, so the track day tools may seem irrelevant but it is the best invention I’ve seen for bike riders.