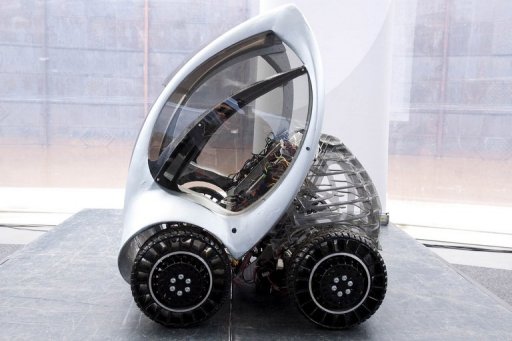 Many of us have seen the Jetsons on Cartoon Network back in our day, where Mr. Jetson used to have a flying car which would fold into a compact brief case as he arrived at his office.

Whether or not the idea for the Hiriko folding car concept was derived from Jetsons’ car, it was however one of my childhood aspirations to be in one and thankfully, with the Hiriko, we’re inching close to actually having the Jetsons car.

The “Hiriko”, the Basque word for “urban”, is an electric two-seater with no doors whose motor is located in the wheels and which folds up like a child’s collapsible buggy, or stroller, for easy parking.

Dreamt up by Boston’s MIT-Media lab, the concept was developed by a consortium of seven small Basque firms under the name Hiriko Driving Mobility, with a prototype unveiled by European Commission president Jose Manuel Barroso.

Demonstrating for journalists, Barroso clambered in through the fold-up front windscreen of the 1.5-metre-long car.

“European ideas usually are developed in the United States. This time an American idea is being made in Europe,” consortium spokesman Gorka Espiau said.

Said that it charge can remain til 120 kms and a speed enough to meet the city’s limits while designer’s vision is to have it as a city-owned vehicle, up for hire like the fleets of bicycles available in many European cities, or put up for sale privately at around 12,500 euros.