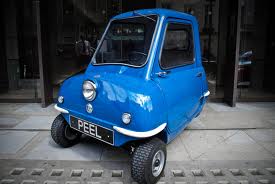 There’s not much to say about it really, except that I want it. And I want it badly but let me tell everyone who doesn’t know much about the Peel P50, it gained worldwide fame when it was reviewed by Jeremy Clarkson on Top Gear.

The car was itself awesome and the way it was presented on the show made it look spectacular. Today, given the cult it has amassed after its successful appearance in Top Gear, car enthusiasts Gary Hillman and Faizal Khan are recreating the smallest car with an electric engine to satisfy the environmental standards of today on both the P50 and the Trident.

Right now, starting at 6,995 GBP, there is a limited edition run going on for Petrol based Peel cars and as their website states, only 9 remain from the total number of 50.

Available in three version, Gas, Eco but I am unable to imagine what the version ‘Fun’ would be like to drive provided that all Peel cars look tremendously fun to drive around.