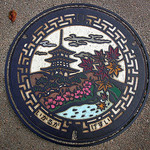 There’s a lack of man-hole covers in Pakistan, and that means people doing in their own right, whatever they have in their grasp to make sure drivers’ see the man-hole rather feel it.

It often becomes a work of art rather a display of warning of an open man-hole ahead but in developed societies and countries, where there is no lack of man-hole covers, Japan for example, have used the man-hole cover as a canvas to paint them with beautiful scenery.

There’s not much to add about why these man-holes were painted as people take care of not only their homes, but add to beautifying their city unlike us, whose responsibility of keeping clean ends at our own doorstep.

The Japanese make sure everything is tidy and pretty.

The group of man-hole covers on Flickr further goes on to show that it’s not only Japan, but rest of the world make sure that the man-hole cover infront of their office or house is a thing to stare at rather something that hides the waste of society.

You can view rest of the pictures here.