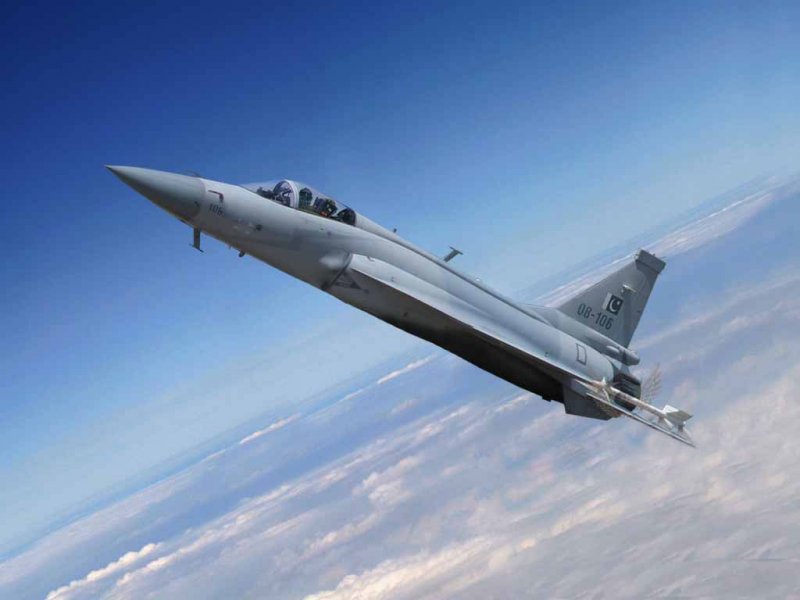 JF-17: The hype and the reality

With the recent induction of the JF-17 Thunder in the Pakistan Air Force, there has been a lot of coverage and excitement generated. No doubt, this aircraft and its related programs represent an important step forward for the PAF and the nation as a whole. Here on PakWheels, Omar Khalid recently briefed us on the basic details of the JF-17 as well as the lively discussion amongst Pakwheelers in fan club of JF-17 at PakWheels forums.

This short article is written with the intent of providing a critical review in order to separate the hype and the reality related to JF-17.

On paper, the specifications and the performance of the JF-17 compare very well to a number of modern aircraft. Some of these potential competitors are listed in the table below, and it is evident that the JF-17 is designed to be a light weight tactical jet aircraft well-suited to the roles envisaged for it according to PAF requirements. Please note that all figures are approximate, depend on variants, and also on the type of mission and ordnance/fuel combination carried.

The goal of having an independent aircraft designing and manufacturing ability is a noble one indeed, and one that any nation that needs an effective military deterrent aims for, just like Pakistan. The JF-17 represents an important step towards achieving this goal. However, the reality of this important advance has been caught up in hype born of both political and military bravado, unfortunately.

Let us take a short look at various steps involved in the design and production of a typical modern jet fighter so that we can then critically evaluate the strengths and weaknesses of the JF-17 program.

Modern military jets are complex machines indeed. Drawing up an initial proposal takes a number of steps, starting from defining the needs and the roles for the aircraft. These requirements are then refined based upon the availability of materials and equipment. Of course, in all of this, cost considerations remain an important aspect of the project.

With this brief background, we can now begin to look at how the JF-17 has come from signing of the Memorandum of Understanding between China and Pakistan in 1995 to the point of being officially inducted in the PAF in 2010, and what that actually represents.

Main components of the JF-17:

The PAF is one of the most capable airforces in the world, despite many disadvantages, major among which are limited financial resources and reliance on foreign technology. A major effort to indigenize the service, remanufacture and recondition its rapidly aging Chinese and French aircraft fleet over 35 years ago led to the establishment of the F-6 and Mirage rebuild factories, which then grew into the complete PAC at Kamra of today. These facilities now form an important part of the PAF, and are now beginning to develop design and manufacturing expertise according to PAF requirements, and as free from foreign interference as possible. However, the major role continues to be service and overhaul of the existing fleet. PAF still does not have access to the level of financial resources needed to truly develop an independent aircraft design and manufacturing capability, and there is not enough of an industrial foundation to provide critically needed associated resources (for example in materials/metallurgy, engines, computing, testing), although these remain cherished goals.

The story of the JF-17, in the context of the present article, is a very good example of how national needs and capabilities and international geopolitical realities interplay to influence outcomes. This story starts with the realization in the 70s just how far Pakistan was falling behind the international community, and continues to the present with various attempts to catch up, some successful (the atomic bomb and missile delivery systems), some partly successful (the JF-17 and the steel mill) and some abject failures (industrial and agricultural strength and socioeconomic development). A detailed discussion of these factors is beyond the scope of the present article, but there are appropriate threads at PakWheels where this may take place after readers have read this article and are inclined to participate.

The JF-17 represents an important advance for both PAF and Pakistan, from relying on jetfighter technology of the 50s and 60s, to at least the 70s and 80s. It is not a state-of-the art airplane by any means, and its design and manufacture will continue to rely on several foreign countries for years to come. However, the basic design is well suited to the needs of the PAF, and if further development can be integrated with the critical transfer of technologies needed to indigenize design and manufacture of jet aircraft and related military capabilities, then this project does indeed have the potential to act as the kernel around which such projects may be able to grow in the future.