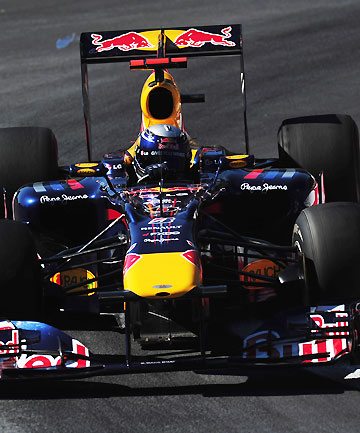 After the first day of practice at the South Korean GP on the new Korean International Circuit, the track was being hailed by every driver as a good track but there were some concerns regarding 2 parts of the track, one at turn 16 and the other at pit lane entry. Overnight work was done in-order to solve the problem after FIA agreed to rectify the problems. Turn 16 Kerbs were made higher so they become parallel to the asphalt, while the wall just opposite to the pit lane entry was moved a bit backward.

In Practice Session 3, Track was as much dusty as it was on the first day which makes the tires graining even more as all the drivers complains about graining throughout the session. ToroRosso’s of Alguersuari and Buemi were the first to come out on the track, both of them have led almost half hour at the top spot apart from twice being deposed of the position by Force India’s of Liuzzi and Sutil. The big guys come on the track half way into the session and immediately start putting faster lap times as Fernando Alonso was the first of the title contenders to come out on the track and also posted a time of 1min40.795s which was improved by 0.001s by Button and just within a minute; first Alonso and then Hamilton improved it significantly to 1min39.705s. Hamilton’s time was even more impressive as he goes wide off the track during that attempt and still manages to put a better time. Just 10 mins before the end, all the drivers were back into the pits after completing their Hard tire runs and prepared for soft tire runs for the last mins of the session. This means the last 10 mins were even more busy then the Q1 session in the qualifying as all the drivers try to improve the timings which led to 2 separate incidents first Hamilton was caught by the traffic and lose time and then Alonso have to avoid the slow moving Rosberg by really braking hard, Alonso was not happy and showed his anger with wild hand gesticulation to Rosberg. In the end, a surprising Robert Kubica tops the time sheet for Renault with Hamilton 2nd and Alonso 3rd. Webber was 4th with Rosberg 5th, Massa 6th, Button 7th, Hulkenberg 8th, Schumacher 9th and Sutil 10th. Vettel finish the session way down in 16th as he is the only title contender to finish outside top 10. The session remains trouble free apart from one moment when Sutil lost his car under braking at Turn 11 and slipped sideways into the runoff leaving a trail of dust smoke behind him. Rosberg was reprimanded for the blocking by the FIA stewards.

In the Qualifying Session, the chances of a mixed front 2 rows were high after the practice session 3 but after Q1 was being led by Hamilton with Vettel just 0.010secs behind gave the indication that RedBull was sand bagging in the practice sessions, Alonso was 3rd. The last 7 drivers included the usual 6 drivers from the new teams and Liuzzi of Force India. In Q2, Webber led the RedBull duo for the top of the time sheet with just 0.035secs the difference between them, Massa was surprisingly 3rd while Hulkenberg, Kobayashi, Heidfeld, Sutil, Petrov, Alguersuari and Buemi were not able to get to the top 10. This session shows the drama of the qualifying as Rubens was being impeded by Michal, although Rubens make to the top 10 and Schumacher apologize to him after the qualifying, FIA stewards reprimanded Michal for blocking. Q3 session, saws Vettel snatching the pole at the very last sec after the Checkered flag was shown. Although Alonso had grabbed the provisional pole with a 1min35.766s and Vettel was down on Alonso’s time in the first and second sector but 3rd sector was where RedBull’s advantage on this track is maximum and Vettel takes the full benefit of that by grabbing the pole from Alonso with 1min35.585, 0.181 secs clear of Alonso’s best time, Webber takes 2nd with 1:35.659, Alonso 3rd, Hamilton 4th, Rosberg 5th, Massa 6th, Button 7th, Kubica 8th, Michal 9th and Barrichello 10th. As this is the new circuit, apart from the racing line, the track is still dusty and is a disadvantage for drivers starting on even positions. But with the weather prediction for the race is rain as forecasted throughout the morning and could stop just hour or 2 before the race, this disadvantage could be nullified and the whole grid will start on the clean track with lowest grip possible as the rain will wash away the rubber laid in last 2 days. Petrov will start 5 places below his qualifying position because of the grid penalty he had received in Suzuka. With 4 of the 5 contenders for the WDC title in the top 4 positions, chance of rain, a new track which provides some thing for every car from the top 3 teams, the recipe is set for an exciting race. Whether the race proves to be exciting is remain to be seen.