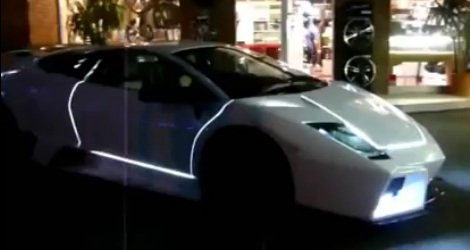 We have seen gold plated and chromed out Lamborghini’s, all with the near perfect combination to be included in the automotive hall of shame. Even though these supercars are exclusive and expensive track monsters, but some do not realize that these supercars’ true potential lies on the track and these owners will more money than taste do all the sorts of things we, the admirers and despise.

The Lamborghini Murcielago used to be considered a well engineered supercar with monumental performance. You’d think that with the 6.5-liter V12 engine and an advanced all-wheel drive system crammed in there, the car would be packed to its fullest, but a fan of crazy LED lights has managed to fit a bit more in there.

This owner, who’s probably arab though we can’t be sure, must have loved Sam’s adventures in the digital world, because he made his own real world interpretation of a Tron light cycle. The Murcielago is fully packed with LED bars.

Bright white light is coming from every where – under the bonnet, in the air vents and even from the engine cover. The LEDs can also be turned blue or violet.

But there’s more to this car apart from LEDs, the car’s rear fascia has been changed into Reventon’s style, even though it actually looks but why wouldn’t it as the Reventon was based on the Murcielago in the first place but we don’t approve having riced a Murcielago out.

However, this Lamborghini Murcielago reminds of me the Toyota Corolla prepared for a shaadi event in Pakistan, shared on Pakwheels’ forums sometime ago, is the prefect parallel to this exploit of the rich world.