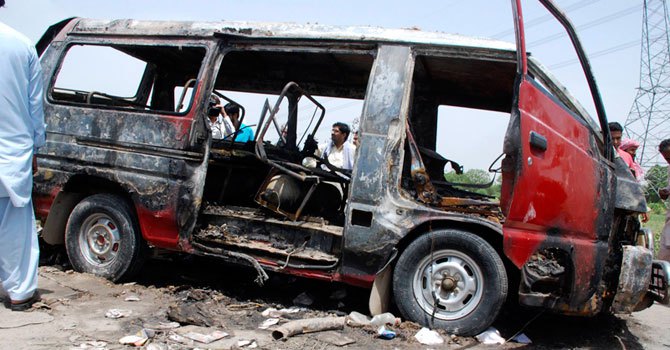 Lessons from Gujarat Tragedy: Automakers should be tried as much as others

After reading the news article “Chief Justice Takes SUO MOTO notice on Gujrat van tragedy”. I tried hard to solely blame the driver but realized that there is simply no single reason for an accident. There are a chain of events which leads to a disaster.

One of the major reasons is the poor workmanship by local technicians, aftermarket modifications which vehicle owners make because local companies simply don’t sell their products in full power pack. They leave areas for installations of fog lights but they don’t provide company fitted wiring. For example; Indus Motors sells Toyota Corolla for around 16 Lac but don’t bother to install a headlight relay in fuse box which according to original wiring diagram is suppose to be there. With period of time, once their dipper switch fails then an aftermarket modification is made by the original vehicle owner and a unqualified technician is invited to perform the job and relays are installed for the first time.

A recent event took place where my 2007 Honda City caught fire after passing through a speed breaker. I was lucky to save the passengers and the car by cutting power supply from battery. After opening the dashboard, I immediately caught the culprit red-handed which was the entire substandard fog lightening wiring was burnt; relay was installed half a foot away from the fog light button which basically kills the purpose of installing it.

Purpose of relay which most people don’t understand is to supply power directly from the battery to the lights with two small wires brought inside the cabin area which are further connected with small delicate buttons who act as a remote control for the heavy current to flow directly from battery to the lights without even entering the cabin area.

Most electricians also leave the relay unprotected in engine areas where either they are shorted after the rain or die after a car wash. Connections are completed using plastic tapes where either tapes melt after receiving heat from engine and results in a short connection and no fuse is installed in between as a safety feature.

Under these circumstances, accidents like Gujrat Tragedy will continue to take place. If anyone is of the opinion that the driver, school management or unqualified technician are the only people responsible for this event then I think it is unfair, vehicle manufacturers are the first to be blamed. In developed countries, US for example, they have NHTSA who continuously investigate the cars and don’t let manufacturers compromise such vital safety features which can lead to fire or other unfortunate accidents.

If Supreme Court has taken a SUO motto then manufacturers should be also on trial first because they are the ones trying to save few hundred rupees on a car worth 1.6 million rupees. Proper standards should be enforced and products which do not meet the defined standards should not be allowed in Pakistani Market.