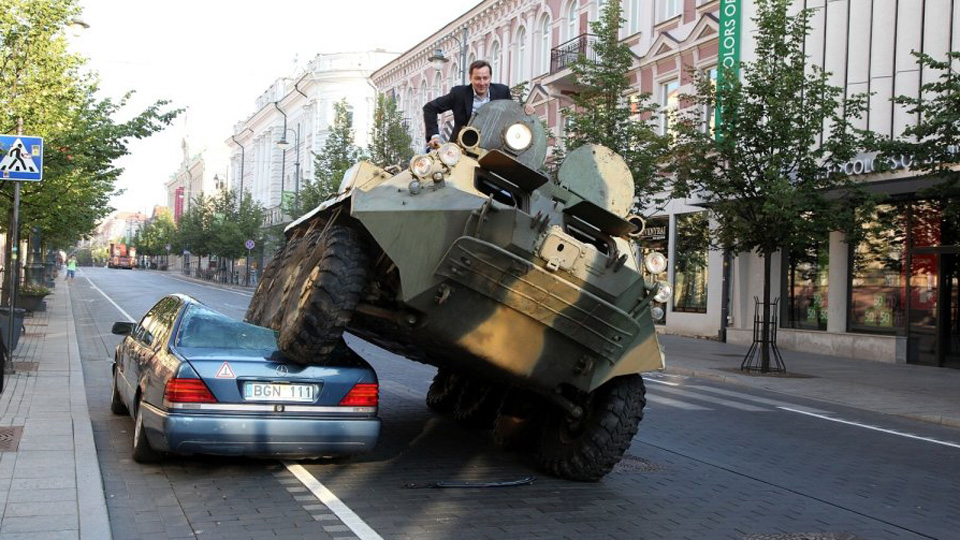 Ramadan arrives for us to exercise fast for the virtues of patience and peace but our streets reflect the opposite of these. Everyone is seen hurriedly advancing towards their homes often violating several traffic laws, the most observed violation is ignoring the traffic signal when iftar is minutes away is routine, next to this is the parking menace seen on various shopping streets across the country.

Wrong parking and encroachment is a threat to the good flow of traffic and during this month, traffic jams are on its peak. I often avoid going into shopping streets such as ‘Tariq Road, Karachi’, etc as the traffic moves at a snail’s while in Saddar, traffic is jammed throughout the year during the rush hours pace due to the two factors.

However, the Mayor of Lithuania isn’t so pleased about the increase in parking violations and decided to set and example which sends shiver down everyone’s spine. Arturas Zuokas, the Mayor of the city of Vilnius climbed on to a BTR and drove over a W140 Mercedes-Benz S-Class as part of a publicity stunt to show his frustration over the fact that rich citizens with expensive cars cannot disregard the law and park wherever they want, even in bicycle lanes.

“I wanted to send a message” Zuokas told the media. “I want to point out that if you have a car and more money it doesn’t mean that you can park it everywhere. Recently there’s been an increase in this type of parking violations, and it shows a lack of respect for others”.

I recall once hearing a Sindh Traffic Police chief over the radio complaining about the cheap parking tickets as a route to this cause with whom I tend to agree. People usually disregard the traffic laws as tickets issued on violations are very cheap for them to worry about.

Last year in August, A Sweden citizen was fined world-record $ 1 million for speeding penalty. The 37-year-old, who was not named, was clocked driving his Mercedes SLS AMG at 170km/h over the limit. Under Swiss law, the level of fine is determined by the wealth of the driver and the speed recorded.