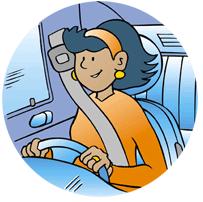 My elder sister (a novice driver) once stopped at a workshop to ask what the little red light flashing among the dials meant. After a  considerable technical analysis the mechanic found out the ‘brake light’ was flashing because the handbrake was pulled up!

That is one of the main differences between male and female drivers. Females being detail oriented and inquisitive, will have no inhibition in asking questions (and directions for that matter) while men usually prefer to take control and normally refrain from too many question on the danger of appearing stupid . Maybe it is this tendency to ask questions that gives women drivers a slightly  tarnished reputation. Asking questions is definitely a positive attribute but some questions are bound to be stupid as I’ve just proven.

Does that make men better drivers than women or the contrary true? While sight of a female driver in front, beside or behind will immediately get male drivers to try to take their cars away as far as possible, research shows males are more likely to get into  accidents. Statistics invariably favour female drivers to be more cautious and adhering to rules than males. That’s why insurance

companies are more willing to insure female drivers as most often than not males are involved in serious accidents making huge claims. Although over the time accidents by female drivers are on the increase, still they mostly account for minor accidents whereas men take the cake in getting into serious and at times fatal  accidents. You’ll find males breaking every traffic rule but the  females will drive with caution bordering on absurdity and will  conveniently ignore all appeals to move faster.

Both sides handles maintenance issues differently. Females, usually not aware of the mechanics of the car, are bewildered by the ‘funny noise’ coming from the engine or the rear. They are more likely to describe symptoms to  the repairman while men will suggest a diagnosis of the problem.

In our society things are difficult for female drivers. They are victims of male chauvinists who consider driving to be a purely masculine activity and every women in a driving seat to be defying this law of nature. Targeted by rickshaw drivers, street hawkers, bus conductors, pedestrians and of course fellow male motorists every female driver here I’m sure must’ve heard the haughty male comment ‘Oh a female driver. Beware!.’

The key to an agreeable road experience is mutual respect and patience. Everybody should practice self restraint and cooperate with others instead of treating traffic as a battle ground where  there will be survival of only the fittest.

Announcement made to lift ban on pillion riding in Sindh