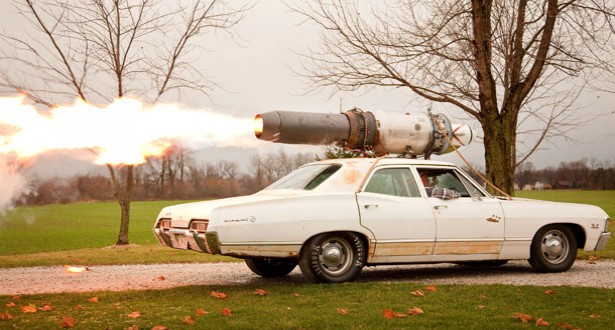 Cruise missiles can cause a lot of damage, but don’t worry as petrol head Paul Stender strapped only the jet engine of a cruise missile to the roof of his car however the damage is only 10 Bugatti Veyrons given that the jet engine produces 10,000 BHP.

Once a reliable 1967 Chevrolet barely able to top 100mph, the Jet-Impala 67 can now reach speeds of up to 300mph, fires out 30ft flames and leaves massive clouds of smoke in it’s wake.

The monstrous motor created by petrol head Paul Stender, has a 10,000bhp engine – the equivalent of 10 Bugatti Veyrons.

The 44-year-old created the jet-powered car with his wife Therese, 29 and their team at Indy Boys Inc who pride themselves on creating the fastest and most bizarre vehicles.

Their latest invention is based on an urban legend about a hillbilly farmer who crashed into the side of a mountain after he bolted a missile engine to the roof of his car. It follows hot on the heels of their jet-powered toilet and their jet-powered school bus which could reach speeds of over 750mph.