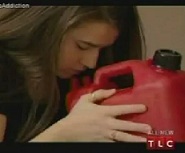 Meet the girl who drinks petrol

Most of us quite like the smell of petrol but we also know the medical implications of it so despite liking the smell, so we’ve never involved ourselves in actually taking this as a habit let alone drinking petrol. However, Shannon, a girl recently interviewed by TLC show “My Strange Addiction,” has drunk more than five gallons over the last year.

She further told TLC that even though it hurts me, it makes me feel good. Moreover, the teenage girl told TLC, that despite that it tingles, then burns the back of her throat. She admitted to drinking up to 12 teaspoons per day of petrol which does a great job of propelling cars, trucks and lawnmowers, and is said to be by most medical experts to be highly toxic to the human body.

There are many implications of petrol being dangerous for the skin or can contaminate water as well, but, Shannon drinks petrol which according to the New York State Department of Health website says that drinking straight gasoline can cause burns, diarrhea, vomiting, and in larger amounts, drowsiness or death.