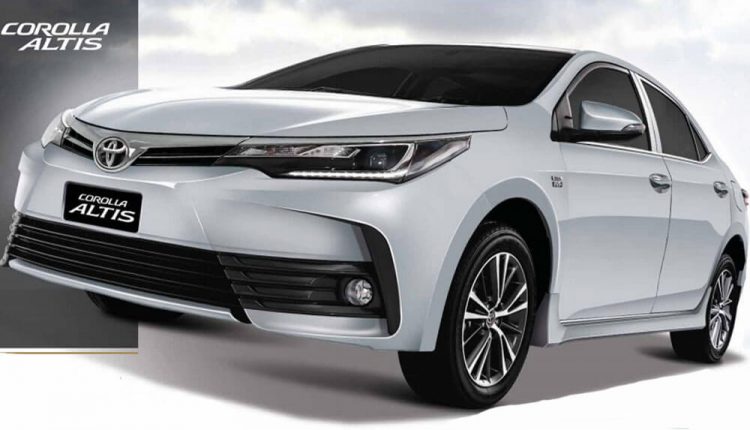 By Sulman Ali On Sep 30, 2020
0 9,369
Share
The  reports and pictures circulating on social media are showing that multiple Corolla cars have registrations on same chassis numbers.  A “Vehicle Sales Certificate” is like your Birth Certificate . It is one of the most important document which reflect the details about the vehicle you just bought.
This is the document you need at the time of registration and it holds the chassis # , color , engine # beside other basic information.
Now as per some insider news circulating around social media, there are multiple cases in which a vehicle got registered in two different cities with the same Chassis number.
Like for an example , vehicle with same Chassis number is registered with the Excise department of Sindh as well as Islamabad. Exact numbers are not known but it is feared that there are at least around 1200 such cases and affecting Toyota Corolla’s of model year 2019 and 2020 regardless of the variant. 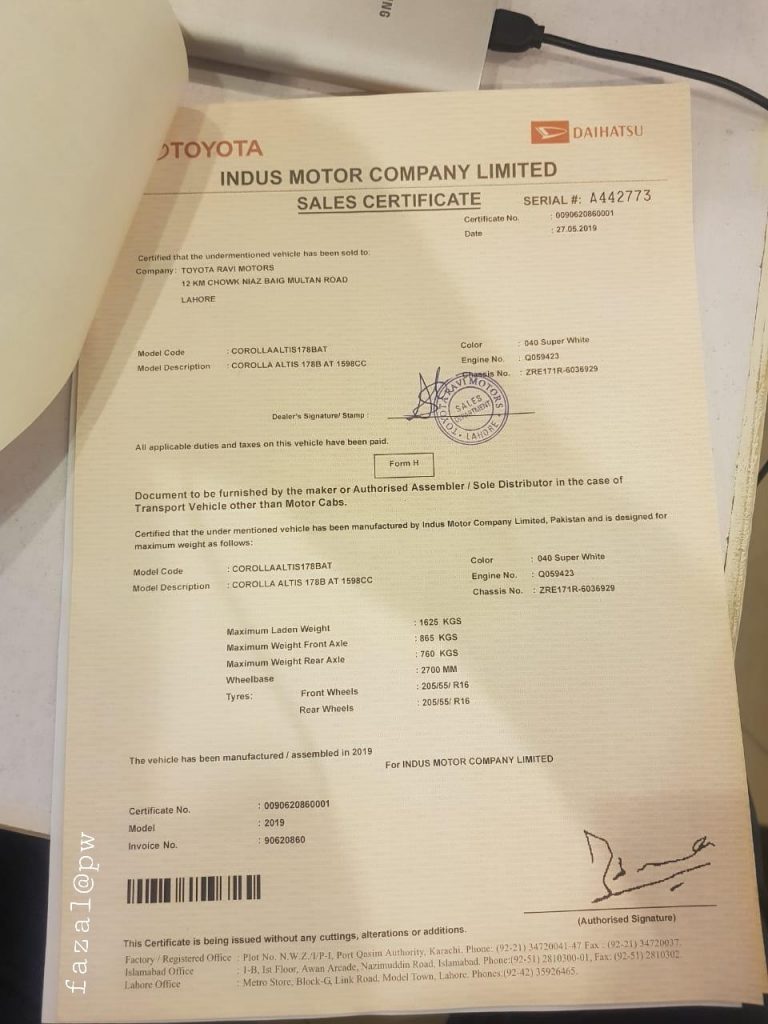 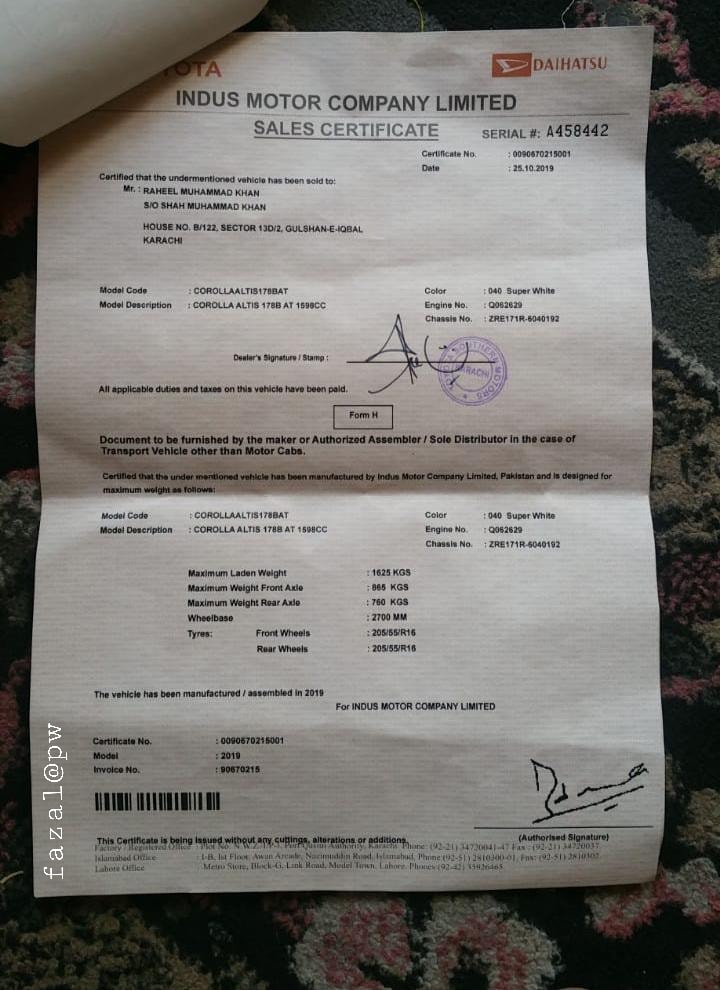 Some news suggests that these invoices were stolen from Toyota Indus and later were used by some individuals in the market to register an illegal vehicle [ NCP as well as Stolen ] by tampering the Chassis numbers.
Again this does not mean there are thousands of illegal registered vehicles due to this problem. But no one knows how many are illegal and registered with tampered chassis #’s and original stolen certificates.
If such thing happened, it looks like the dealership or concerned person reissued sales certificates but another genuine stolen one was already floating around in the market and used by fraudsters for their illegal gains in different province. 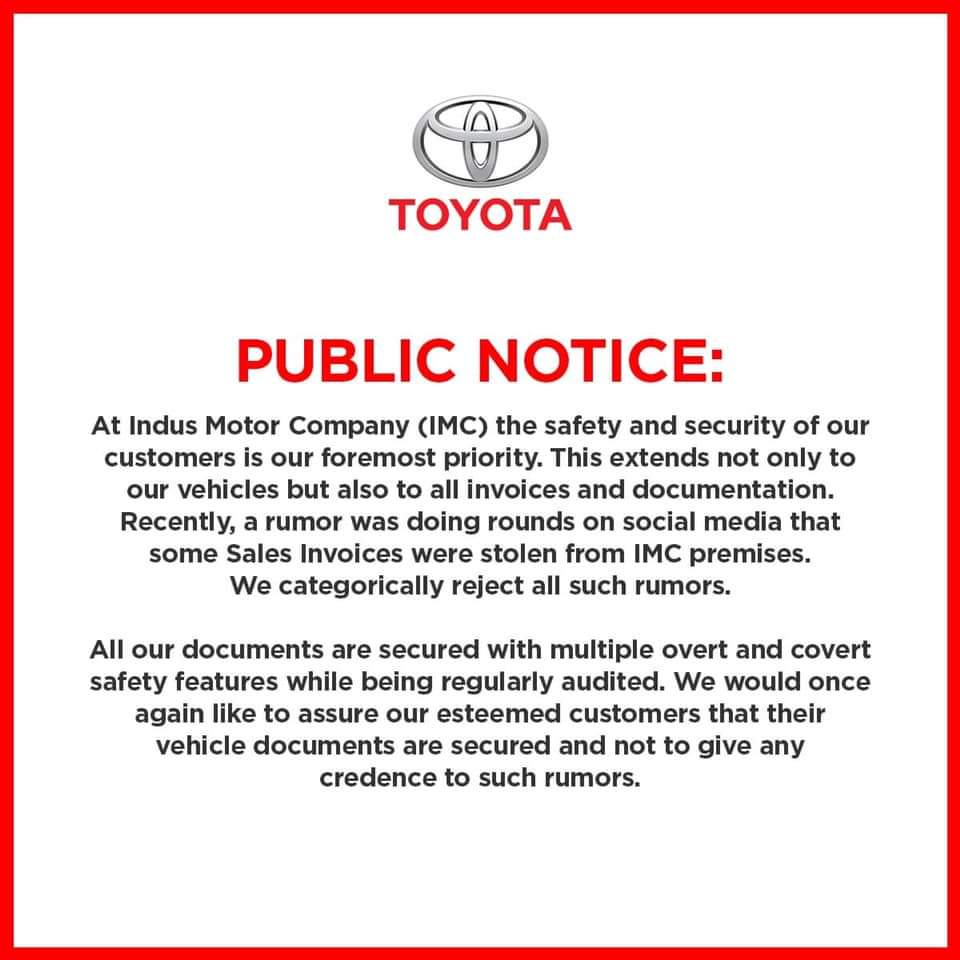 To inform our readers further, PakWheels probe the matter deeply. Our investigation has shown that Toyota Indus Motors is not involved in this scandal. There can be multiple forces behind this, and the major one could be a fraudster dealer on any dealership of IMC.

Corolla Issue: How it May Have Been Done:

Our probe has found the possible method the fraudster may had followed. First, he booked the cars for two individuals, without any documentation, because they booked them for investment. The dealers must’ve taken payments from both, and handed documents to one, while gave vehicles to other one. Then the dealer must’ve vanished from the scene, leaving one with papers and other with cars, without any documents.

To get rid of them, the person with these cars sold at much lower prices to some other shady dealer or individual. Here the real game started. The new person must’ve searched the registration number plate of any random car, and then simple copied the detail of that random car, including Chassis number. Now, on papers, the car has complete record.

In next step, that shady dealer sold the car to a buyer, possible on much lower prices. When this new buyer went to to excise for transfer, the authorities told them these papers are fake and coped from an authentic vehicle. This whole fraud circle led to documents with same Chassis number.  Hence, the scandal.

This is a serious issue and everyone who is in market for any Corolla variant especially model year 19/20 must verify and double check that the vehicle they are buying has not a tampered chassis number . Unfortunately in many cases , it can only be verified by excise labs. If you see anything out of ordinary, better to leave such vehicle and don’t do any transaction.
Furthermore, never buy a car with much lower prices than market, never pay in cash and don’t make a decision in haste. Always, take the documents to excise for cross check before buying, which will save you from the fraud.

This is also an issue for real owners of the vehicle whose Chassis number has been duplicated by culprits especially due to fact that different excise department from different provinces don’t have data reconciliation. Means their data is not universally integrated among the Excise departments. In short, both a legal and illegal vehicle becomes doubtful.

Two such cases are shared as an example which are genuine but there are two different vehicles registered on each of these genuine certificates in different provinces.

Lastly, this matter is still developing and exact information has not trickled out yet. Stay tuned for more updates.