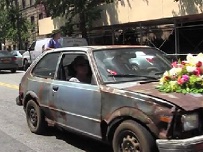 People love their cars just like anything, the connection, the relationship that they develop with cars is just like how they feel with humans, or animals. Its a relationship of joy, sweat and pain like any relationship we have.

While some are unable to let go off their cars, this New Yorker decided he will let go of his beloved but with a full fledged funeral for ‘Bluey’, a name given by the owner on its blue color.

The 1982 model Civic, which has covered 170,000 miles in 30 years, has endured a lot of hardship. Right after he (Bluey is a dude) was purchased, Bluey got involved in a major crash that rendered him totaled but Harry Ettling, the owner, got Bluey repaired and kept on driving. Ten years after that incident, Bluey was flipped during the Washington Heights riots of 1992 but it was repaired on moved on until now, it is in a condition where Ettling things his feet might go through the rusted floor of the car, he decided best to send the car to junkyard for parting with proper funeral processions.