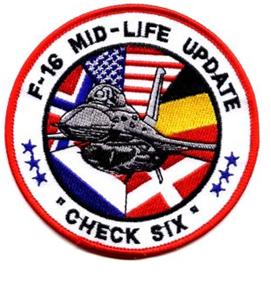 When the F-16 entered service in 1979, it was decided that it will be replaced by its successor by 1999 but due to several economical and political reasons, its successor [i.e. F-35 Lightening II] is delayed until 2014. Thus NATO F-16 operators sought of a major up gradation of their F-16A/Bs to bring them on par with the latest F-16C/Ds in service today.

This up gradation is called Mid-Life-Update or MLU which involves the up gradation of avionics, weapons system, radar and overhauling of engine. Airframe is also strengthened to keep the aircraft airworthy for several more thousand hours in the air. This up gradation involves complete stripping off of the aircraft from its nozzle to its nose cone, and hundreds of parts are replaced with the new ones. MLU increases the life by approximately 5000 hours of an F-16 whose standard life is 8000 hours.

Recently Pakistan Air Force has planned to upgrade their 45 F-16A/B Block 15 in order to extend their life and equip them with latest weapons and defense systems. It was a necessary step which has not only minimized the requirement for new jets but also has added a lethal punch to our existing fleet. The deal values approximately $151 Million. The work has already started and is underway in Turkey at TAI [Turkish Aerospace Industries] which builds F-16s for Turkey itself under license from Lockheed Martin, USA.

Dutch F-16A Block 15 [MLU] in-flight in Afghanistan. They are being deployed in high threat combat missions due to their excellent capability and reliability.

There are 4 types of Mid Life Updates available. Their details are as follows.

Integration of the Link-16 system

Introduction of advanced short-range missile, as a replacement for the current Sidewinder (AIM-9X, IRIS-T)

After this upgrade, our F-16 Block 15s will be able to carry advanced systems and avionics which will incorporate latest technologies will enable our F-16 Block 15s to service high threat environment and increase their combat effectiveness through practically unhackable Link-16 system which is a communication system used by pilots and ground crew to send or receive information about the battle field.

The following weapons will be equipped on our upgraded F-16 Block 15s.

Other Systems like, Anti-Skid system, Identification Friend or Foe [IFF] etc will also be added in our current F-16 fleet resulting in a truly remarkable fighting capability. This will make PAF a truly formidable Air Force in Asia.