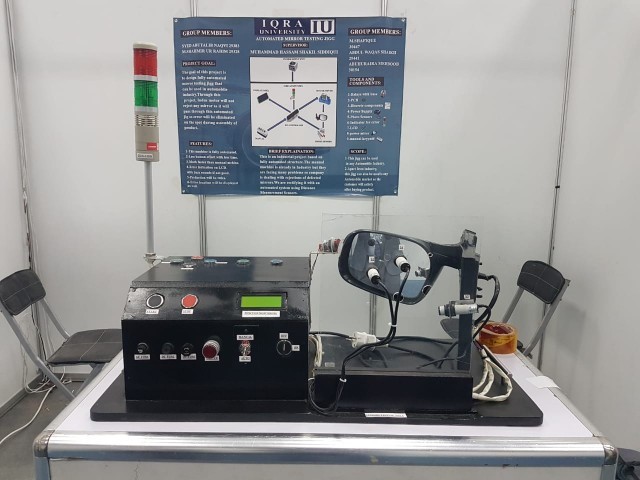 Students from Iqra University will be undoubtedly bringing a major change and innovation in the automobile industry. Muhammad Shamshirur Rehman, Syed Talib Naqvi and Abu Hurairah Mehmoob from the electrical engineering department of the Iqra University have created an “Automated Mirror Testing Machine”. It took several months for this group of students to create this mechanical device. This device easily and automatically traces any problem with the help of electronic side mirrors. This process is currently manual but this device would be a game changer. It would not only decrease the time to half but it would also help in increasing the manufacturing of mirrors in the automobile industry.

By the end of this year, this team from Iqra University shall also be presenting their device at Thailand’s Stanford International University.

This device sounds intriguing for automobile enthusiastic but have you wondered how did this team come up with such an innovative idea? Well, while talking to the media Mr. Syed Talib Naqvi told that he did an internship in 2017 in a company that manufactures mirrors for automobiles. There, while doing his internship and observing the step by step manufacturing of mirrors. He further told during this process, he noticed that there is a lack of foolproof quality check of the mirrors during the manufacturing process.

Mirrors of an automobile are made of about 8 to 10 component and they have to be assembled but during the test, the worker has to manually rotate its axis to check it. And that was the time when Naqvi realized that this step is arduous. But even then it was very difficult to locate the cause of failure in the mirror accurately.

In order to get to know the issue in the mirror, they had to open and check each component of the assembled mirror.

It should be pertinent to mention here that at times the mirror would easily pass all the tests but again in some cases when it reached to the buyer, there is a fault in the mirror from which the manufacturer is unaware of and thus this ruin the image of the company.

Hence, this was the trigger which made this team of youngsters come forward and work for it. This proper testing procedure was indeed an opportunity for Naqvi and team to not only properly test the mirror but to also pinpoint the faults by itself and that’s how they came up with “Automated Mirror Testing System”.

Now, there would be another question in your mind that which products are used in this device or whether they are local or imported. Regarding this, Mr.Naqvi told that in order to create the minor testing machine, all of their products were local. They would have been able to use any of the sensors from the market but since the imported sensors were expensive. They opted to buy the parts for their device which were locally manufactured.

The sensors, if they would have opted for imported ones would cost PKR 35,00 while the same sensors which were Pakistan-made cost around PKR 1200-1500, said Naqvi.

The other best feature of this device is that it would be cheap. In Pakistan, this device would cost around PKR 150,000 which would be 20 times less than the global market. And, if we compare devices like these with the one manufactured in Japan and Korea then there it cost around PKR 2.9 million.

Last but not the least, this device would be having both automatic and manual methods i.e. in case of failure or any fault in automatic method, then the manual method would be used as a backup.