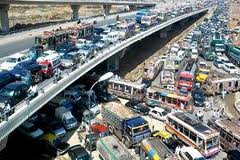 While I was visiting UAE last week, the most impressive things to me did not include exotic cars or buildings but the way the government implements traffic laws and those laws are not limited to vehicle but pedestrians as well.

Alongside thousands of cameras monitoring and issuing fines to violators, RFID system is also partially implemented over there which according to Wikipedia, ‘is a wireless non-contact system that uses radio-frequency electromagnetic fields to transfer data from a tag attached to an object, for the purposes of automatic identification and tracking.’

This ingenious system of monitoring and tracking keeps everyone at bay from violating traffic laws because you never when you’d have been tag for a traffic offense.

There are 1.3 million Pakistani over there and everyone follows the laws, for example, a friend who would speed during the empty roads of night here in Karachi wouldn’t dare cross the speed limit in UAE because of the system and the hefty amount of fine.

The system itself is impressive but it is not what makes everyone fear the system. It is the hefty amount of fine which keeps everyone at bay.

Unlike in our country, where traffic is a mess because nobody fears the law as there is no system of tracking and monitoring but the fines that follows are too little to worry about even for the poor.

A five-judge bench of Supreme Court had ordered the traffic police to take action against thousands of buses and minibuses with no safety and fitness certificates and directed AIG traffic police to submit a report on all types of penalties for motorists in violation of traffic laws.

We all know the traffic fines are too petty in Pakistan for anyone to bother following the rules and quite amazingly, the fine for an unfit vehicle if seen driven on the road is only 100 rupees while elsewhere in the world, the same offense would cause massive legal trouble for the driver and the car impounded indefinitely.

Following court’s orders, AIG traffic police submitted statistics which stated that 2.7 million vehicles are on roads of Karachi of which, one million are motorcycles whereas, only 19,539 vehicles were examined and found to be fit for the roads. But, another 1,104 were declared unfit.

The judges asked why those unfit buses were not taken off the roads. The officer replied that the police had no legal powers to do this. The officer said they could not even cancel the registration.

“The government passes laws of its choice overnight,” remarked Justice Anwar Zaheer Jamali. “Every day we face this dilemma,” he added.

There are only 15,000 registered buses in Karachi which has 6 million people daily traveling on public transport while on 3,200 traffic policemen are there to control a city with 2.7 million vehicles.

Interesting thing is, during my stay in UAE, I hardly spotted any traffic policemen unless there was an accident but the system was there and people knew they have to follow or face massive fines and possibly suspension of license and impounding of their vehicles and they have to check for fines online themselves every now and then.

They have made the railway network in Dubai to control the traffic and motivate people to choose train over vehicles whereas here, the transport mafia took control of the government and shut down the Karachi Circular Railway.

The resolve to act against offenders of the law no matter which nationality or social class they belong to shows commitment towards a developing civilized country which brings the world to your doorstep rather the other way round.