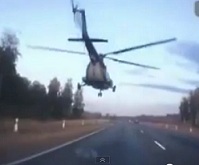 Russian highways are full of surprises!

Recently, we shared with you a video of a Russian military jet flying just meters above the cars on the highway, it was thankfully not traveling on sub-sonic speeds as the car would’ve shaked until their windows had shattered but the internet thought it off as a fake or a one-off incident until this video arrived.

Now though, we have another aircraft flying just feets above the ground, it’s a helicopter from the Russian military that’s flying only a few feet above the road as it overtakes (or so to speak) a passenger car or cars!

A made in China wooden electric car that actually works

Japan speaks out to Pakistan: Fix your auto industry