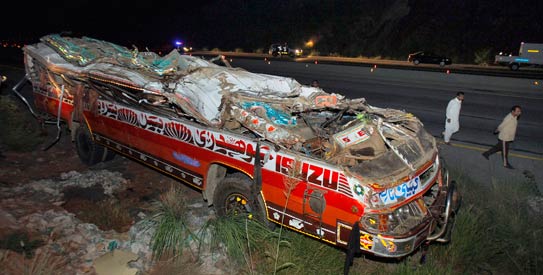 Safety hazards we see on our roads

Having a set of wheels to transport people is a blessing but there is a fine line that distinguishes blessings and curses. This fine line is usually rubbed off or sometimes unknown in our country where you see truck cabins made from wood, bus bodies made shabbily, and no law for setting safety regulations for multiple passenger vehicles; just recently we saw a van which was carrying passengers on a highway got its roof ripped off, driver and some passengers killed. Most of time the culprit is the driver of that van who speeds like a maniac on a highway.

When passengers buy a ticket to board a bus to somewhere, they are buying into the confidence and experience of the driver of the vehicle, that the person is skilled in his work, skilled carrying the tags of sanity too, the person is not buying a favor to get smuggled. The sad incidents of vans and buses crashing causing multiple deaths should be dealt with a hammer – all of these passenger buses should be insured by proper insurance companies so that they are liable to follow, the bus drivers activity should be monitored by law by use of tracking equipment or data-logging of the vehicle itself.

Reason for such actions is that human life is the most expensive cargo you have on board. To further elaborate the point; our high speed buses should have active control of their suspension system enabling them to cope with the presented loads. They should not be truck chassis converted into passenger buses with the engine sitting up front that can crash into the passenger cell killing everyone with it in the event of a crash. The ride heights, emissions, total weight, insurance and speed should be governed and strongly implemented by law.

If one driver fails on multiple accounts of over-speeding, overloading, illegal loading as recorded by the loggers or tracking units – that driver’s license should be suspended for a deputed amount of time, with maximum penalty being cancellation.

Ideally there should be proper think tank sessions involving people from different walks of life, and studying the pros/cons of such implementation, than our road authorities should implement this under strong hold that all passenger buses or cargo vehicles should follow a certain path of law to actually move their vehicles. However, I assume knowing Pakistan, it would be settled by someone gifting someone with a few tens of millions of rupees, samosay and chai because if they were to do something than challan amounts would’ve been raised by now as right now it is a very petty amount and no one bothers about it therefore the mess, but raise in challan amounts is in government’s own interest and it has done nothing about so what makes you think that the children which died in the school bus crash will make any difference in the system unless – It should be voiced out by our general population to go against because for sure, nothing is going to happen itself.