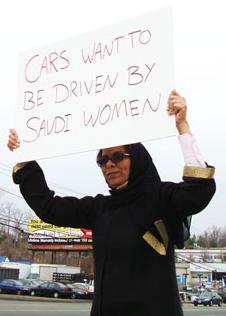 A woman in Saudi Arabia sacrificed the little freedom she had and went behind bars after protesting against the female driving ban through driving a car. Her sacrifice was enough to make all the women drive their cars in protest against the ban, make a video and upload it on Facebook anonymously.

Her name was Manal Al-Sharif who was an IT expert behind the campaign “Women2Drive” and was urging other women with foreign driver’s license to come out on the roads on June 17 in peaceful protest and posted a video of her driving herself on youtube, the video had around 500,000 views. Her brother was also in the car while she was driving, and was also taken into condition.

As I have lived 14 years in Jeddah, Saudi Arabia, I know how strict the religious police is, doesn’t hand over anyone leverage to make sure the criminal become an example. The religious police extended Manal’s punishment to 10 years and also have threatened to take her 5-year-old son away. “This is a message that any woman who dares to drive her car will face the same destiny,” her lawyer Waleed Aboul Khair told The Associated Press.

The Saudi Arabian women are forbidden to hold high government office, vote or roam in public places without their man’s permission. However, Saudia Arabia’s government did give a hint that it wanted to lift the ban but fear of reprisal from religious leaders hasn’t allowed them to do anything formally.

Saudi Arabia is the only country in the world that bans women – both Saudi and foreign – from driving. Iran who has similar laws like Saudi Arabia for women doesn’t forbid women from driving, hell! Women in Iran compete in rally racing. Also, Hillary Clinton wasn’t too far behind to comment on this issue, she had her spokesman speak on her behalf “”We understand there’s an active debate on a lot of these social issues in Saudi Arabia, and we trust the government of Saudi Arabia to give careful consideration to these voices of its citizens as they speak about issues of concern.”

The following video was posted on Facebook anonymously, women are driving in Burqa as a sign of protest against authorities and support for Al-Sheikh, and in one video, a woman tells a young girl: “This is important. Don’t be afraid”.