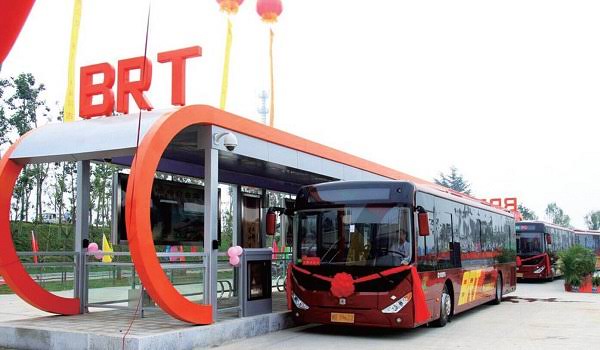 After a delay of several years, the Red Line Bus Rapid Transit (BRT) project is all set to go into the tender stage as the Sindh government will invite tenders for the $503 million project by the start of 2020.

The Red Line BRT project faced many delays in its start over the years, but everything finally seems to be making sense now with the completion of all sorts of financial and technical aspects of the project. According to the officials of the project, the construction work of the project is planned to commence from August 2020 and will be completed within 24 months.

This particular BRT project will play a vital role in connecting the Model Colony of Karachi to the Tower area through Numaish Chowrangi and the Green Line. The Red Line BRT will travel from Numaish Chowrangi to the Tower area by passing through the Green Line corridor till the Jama Cloth market before it will be diverted to a specifically constructed corridor for the BRT to reach the Tower area. The commuters will also have access to other parts of the city through the hub of BRT, Numaish Chowrangi. According to the Project Manager of BRT Rasheed Mughal, the project will comprise of two corridors extending to a total span of 26.6 km.

The complete details of the route and bus stops are given in the map below:

Furthermore, a total of 24 bus stations are planned to be built for the Red Line BRT project. Apart from them, five more stations will be constructed to be used along the common corridor. The mega-project will be using as many as 213 buses along its route to serve the general public. According to him, the fare for the BRT service will be ranging from Rs.15 to Rs.55. The Red Line Bus Rapid Transit (BRT) project will cover ten public transport routes, which indicate its vast network of transport in the city.

Construction work of the BRT project and related facilities:

It is pertinent to mention here that the special corridor of the Red Line BRT project is planned to be constructed at grade level, which means that there will be no elevated structures involved in the project. However, several flyovers and underpasses will be built for the facilitation of the general public traveling on the roads along its route. Such structures will be built at New Town Police Station bus stop, Safoora Chowrangi, Mausamyaat bus stop, and Shahrah-e-Quaideen.

Apart from the BRT project’s construction work, the renovation of historic buildings along the route of Red Line corridors will be carried out as well. Moreover, the parking facility will also be established along with the construction of a 53-km long drainage system. The authority has ensured that the construction work of this project would cause minimal traffic disruption, and any damaged part of the University Road will be reconstructed upon the completion of the project. The benefits of this project are not only limited to facilitating the general public with modern and accessible public transport, but it will help promote cycling culture in Karachi. Along the route of the Red Line, the government will also build a 58-km long cycling pathway starting from Model Colony and ending at the Tower.

All the construction work, including the operations of the Red Line BRT, will be managed by Trans Karachi, which will operate under the Sindh Mass Transit Authority (SMTA). The Project Implementation Unit of SMTA will be merged into Trans Karachi to make appointments for the project on merit-basis.

The expected cost for the completion of the project is $503 million, which is largely contributed by several donor agencies on a loan basis. Nearly half of the BRT project’s funding is sponsored by the Asian Development Bank (ADB), which has approved a loan of $235 million in July 2019. The other donor agencies include the Asian Infrastructure Development Bank (AIDB) and the French Development Agency (FDA), both of which approved a loan of $71.81 million recently. Moreover, the Green Climate Fund is also supporting the project with a $37.2 million loan amount and another $11.8 million as a grant for making the project environment-friendly. All these loans are acquired by the government on easy terms and will have to pay back in 30 years.

Contribution by the Sindh government:

The Sindh government itself is contributing $75.9 million, which is only 15% of the overall estimated cost of the Red Line BRT project. Despite being a provincial government project, the federal government has given a sovereign guarantee for the project.

BRT buses will be based on CNG:

The Project Director of BRT aims to run the Red Line transport service as an environmental-friendly project. All the buses of the Red Line BRT will be based on compressed natural gas (CNG). As far as the source of CNG for this project is concerned, it will be taken from a specially established bio-gas plant in Bhains Colony. The plant will have the capacity to produce as much as 20,000 kg of CNG in a single day. Out of the total CNG produced from this plant, 10,000 kg at the cost of Rs.23 per kg will be purchased to run the project’s buses in a smooth manner. The rest of the 10,000 kg of CNG produced from the bio-gas plant will be supplied to Sui Southern Gas Company, which will generate Rs.1 billion of revenue annually. With this planning, there will be no need to provide a subsidy on the operations of the Red Line project.

What are your thoughts on the Red Line BRT?

The production of electric cars is still a major concern – Find out why!

Pak Suzuki might Build A Second Manufacturing Plant In Karachi

Hyundai Staria Spotted, Does That Mean Another Car Launch?