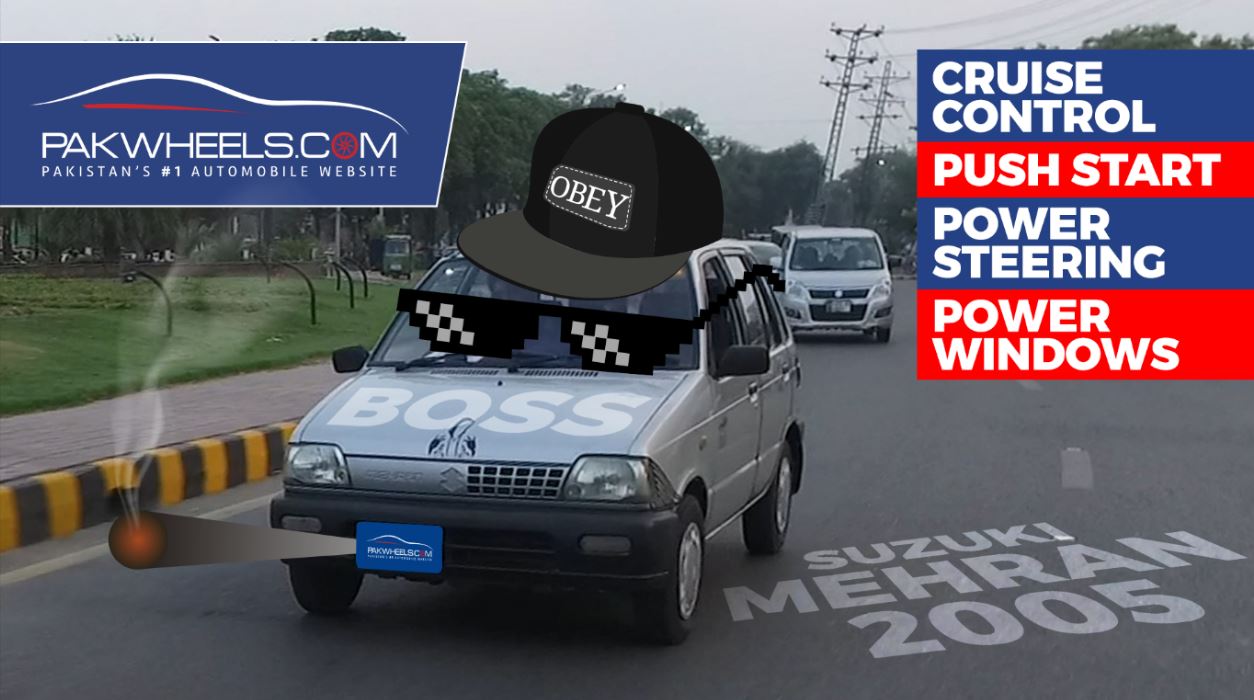 Suzuki Mehran has been hailed as a legend in the Pakistani auto sector. The car has been dubbed as the “boss” by auto enthusiasts. It has been the cheapest locally manufactured car until recently when it got discontinued. It housed the most basic features and was the choice of anyone who was entering the car market. Being the cheapest option, Pak Suzuki sold a huge number of Mehran units in Pakistan. The particular car under review is a 2005 VX model of Suzuki Mehran. The owner purchased this car in installments. At that time, the price of new VX Suzuki Mehran was PKR 350,000. The owner stated that it was the only choice that he considered as there was no other option available in the market at that time.

The owner likes this car as a budget option in the auto market. However, the owner criticizes the lack of some necessary features in a humorous way. He alludes to the lack of power windows, power locks, power steering, and the lack of a basic infotainment system. He also mentioned that his car’s air conditioning system once caught on fire due to malfunctioning. He also points out the subpar performance of the air conditioning system of Suzuki Mehran. The legroom for the front passengers is ample; however, it is not enough for the rear passengers.

The braking system of Suzuki Mehran is also not up to the mark and gives a slow response in the rain. The running costs of Suzuki Mehran are low, considering that there is a lifetime token, low maintenance costs, and high fuel average. In urban traffic conditions, we know that cars can get scratched or hit quite frequently. Owning a Mehran gives peace of mind when driving around the city as most of its parts can be bought at affordable prices. The motor oil change can cost you around PKR 1700. Moreover, the headlights and rear lights can be bought in PKR 1,000 to 2,000 from the market.

See the complete video of the review below and get entertained:

The side mirrors are also very narrow and do not give the driver a wide view of the traffic to make safe turns and changing lanes. However, since the rear window is large, it is easier to park your car or to look back while changing lanes. The simple nature of Suzuki Mehran makes it rigid and robust. According to the owner, you can take this car anywhere, even to mountainous areas, and it will not break and will never disappoint you. The owner also mentions that he once got his Mehran fixed from a motorcycle repair shop.

Although it is debatable that at a very low price point, Suzuki could not offer a lot of features in Mehran, basic features like cup holders must be provided in the car as they are very cheap to include and will help car manufacturers build positive brand equity in the market. The build quality also has some issues, e.g. the dashboard storage space cover is loosely fixed. No doubt, the durability of Mehran is renowned across Pakistan, and Mehran has been the longest production car in Pakistan. You can easily find a Mehran in the price bracket of PKR 150,000 to 900,0000, depending on the condition and the year of production.

Stay tuned for more informative content and drop your thoughts in the comments section below.

IMC offers a special discount on 1.3L variants of Corolla

“Willy’s Jeep Can Be Driven Even in Water” – Owner Review