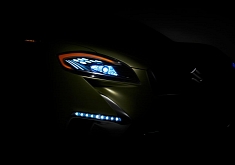 Suzuki has been putting pretty impressive designs this year and we have to admit it, we were astonished to see the new Jimny Concept as it is dynamic looking, futuristically styled SUV and now there’s more to come to Paris Auto Show.

Among many cars Suzuki has planned to show at Paris Auto Show is the S-Cross (don’t mistake it with the S-Class) which is a crossover vehicle (as the name suggests) and Suzuki has released a teaser image.

According to the official information, this new concept will feature an “Emotion x Quality x Aerodynamics” design theme about which we have no idea but what we do realize is that lately, Suzuki’s design department has been pulling out very neat design and this so far, looks promising.

The S-Cross concept will be shown alongside Suzuki’s current range of vehicles, including the Alto, Splash, Swift, SX4, Jimny and Grand Vitara models. We are really looking forward to both the concept, as well as the production model and tune in to Pakwheels as we will bring your live coverage from Paris Auto Show.

Pakistanis shouldn’t get too happy as we’re still with Pak Suzuki and Mehran is good for another 2-3 decades for Pakistan, thinks Suzuki.