In the automotive industry, Swedes are known to be the most conscious lot about safety in cars. When the automaker Saab bankrupted, Top Gear made a documentary type segment on their show detailing the company, it was in this show that I came to know how pedantic were they about safety because when GM bought them out, the Americans simply wanted Saab to rebadge GM cars and sell them but, according to the Swedes, GM cars were not up to the safety standards and incurring huge costs, and without GM’s approval, they re-engineered whole cars to improve on safety aspect.

Volvo, another Swedish brand invented the three-point seat-belts and instead of filing for a copyright to safeguard their invention and make money like companies like Apple do today, they instead gave it away to the rest of the world’s automakers for free. And still that same seat belt design is used and countless lives have been saved.

Now, Swedes are at it again and after intensive testing which first began in 2005, and re-enactment of millions of different type of bike accidents, they have developed an invisible helmet which is just genius!

In the photos attached with this article, people are wearing bike helmets but you can’t see them, but they are fully protected from any impending accident. But if you look closely, they have attached to their necks a muffler type piece which bursts open and fully wraps around your head and neck if you happen to be in an accident. 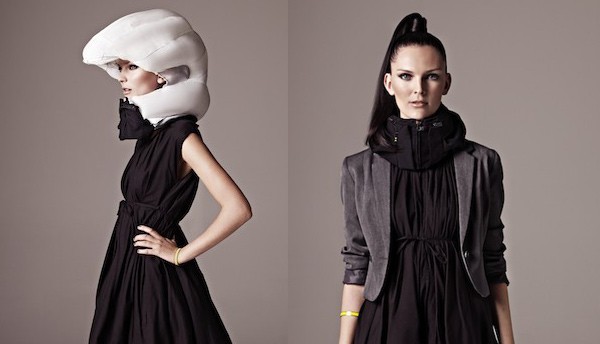 The Hovding Helmet is an ingenuitive idea which is although very expensive since its new and will hopefully catch on but it will not let your brain be splattered on the sidewalk.

Just look at the video to see how it works. And you must! Because in Pakistan, if someone would’ve come up to someone rich and said that she has the design, the full recipe to make an invisible bike helmet and seeks an investment for testing, etc, I bet that she would’ve been laughed off.

They have discounted cars from the future which they’ve got it wrong however, the engineering and design of this invisible bike helmet is just great and we certainly hope that this catches on.