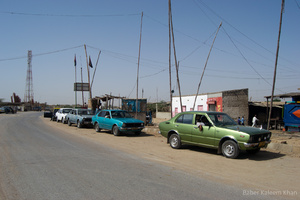 What makes our world a truly remarkable place to live is the choices that we make because it brings about a combination of different tastes and cultures making our societies, cities, countries and consequently, our small world to have such a beautiful contrast of colors.
These different cultures and tastes thus give us the chance of exploring and making the choices that we make to satisfy ourselves.

Communities are established to serve the people of one culture to live in unity and prosper their faith and culture but except those which exists online, there hasn’t been any colony or a community which consists of people that have their faith in only one car, a faith so strong in its reliability and performance that it has become a part of their culture. One that signifies and has become their recognition. 1978 Corolla is one such car.

In Pakistan, if you own a 1978 Corolla than chances are that you would be atleast once in your lifetime be asked on the signal as you wait for it to turn green to see if you’re interested in selling it. Chances are you wouldn’t because it’s such a good car but there are many who are and those sold – end up at remote and rural areas which are underdeveloped with broken roads and infrastructure.

Those people are Pashtuns in majority who love this car but never did we wonder that they would create a town; Afghan Colony, only 20 minutes away from Karachi into a communal celebration of 1978 Corolla.

We also must mention that Afghan Colony (’78 Corolla Town) comes in first when you get off the Super Highway to go to the famous Cosy Water Park. While nobody dare bothered to notice that everyone had the same car in this town but we did – and it wasn’t something that we dreamed off. Just a vision to see a place where there is only one car. What would the place be like?

Consequentially, we had a feeling that the place where everyone is using is ’78 Corollas must be a tough town to live in and it was.

Why everyone uses only the 78? Because of the rough terrain with gravel, mud, broken roads, etc etc. But there’s more to it. There’s the 78′s reputation, than RWD, reliability, small tires to hover on gravel and thin sand, big body, ability to climb steep inclines with tremendous load and a mind-set that disregards today’s engineering – a mind-set of steel-bumpers, round lights, and RWD Corolla.

The town still had some 1974, KE70 Corollas and even fewer Datsuns but even they were bought by the people of the town as the performance and reliability is similar to the 1978 Corolla. It is like one sub cast of people within the larger umbrella.

This than is the first community of people that are faithful to only one car – living in a town which soon be known as the 1978 Corolla Town as the people will indeed buy out all the 1978 Corollas from the country and bring them here.